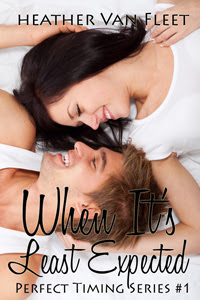 Moving on after a tragedy can be impossible – especially when you’ve been dealing with those tragedies for over two years. But it’s her senior year, and Harley Anderson is more than ready to do just that, even though the skeletons in her closet can’t exactly be hidden.
Enter Mason Daniel, the egotistical, sexy, surfer boy from California – a boy with his own hidden demons, and even bigger secret agenda.
Mason isn’t right for Harley. He knows this better than anyone. He’s the epitome of a runner–a guy who takes what he can get, only to split a short while later. But he can’t deny the emotions that Harley brings out of him, so he’s going to break his rules for once.
He should have known what it would lead to… Two kindred souls – both lost and then found. Will they fail, once again, in their search for contentment and happiness, or will they finally find true love, when it’s least expected?

This is the story of Harley(I LOVE Her name!) and Mason.Harley has been dealing with guilt from a tragedy twofold for several years now.Poor Harley has been through so much in her life and Mason..heck Masons a young guy not planning on staying for long.Mason..Mason Mason Mason.What a cocky guy Mason is.Its so nice to see him knocked to his feet..with his tongue hanging out when he sees Harley.I really enjoyed this story.Its from both points of view.I think it would have been a tiny bit helpful if when the Point of View changed it was like written above the start of the paragraph.But other then that I loved the story.I really really love when two people who are lost find each other. Im SOOOOO Glad this is a series.I LOVED the ending and Cannot wait to read more by Heather Van Fleet!What an amazing Debut Novel!

If,Le'BookSquirrel had to pick a theme song for the book this would be the song!

1. Why did you start writing?
Well, let’s see . . . I’ve been an obsessive reader for years now, and have always had the idea of writing a book I my head, but it was mainly a bucket list thing. Then when my youngest daughter was born, and I took on the stay-at-home-mom role, I decided why not start now! Truthfully, I had no intentions of actually finishing a book, let alone publishing one. I felt it was more of a thing to pass the time when the kiddos were napping or at school. But then once I started, I couldn’t stop myself, and that’s is when When It’s Least Expected was born.

2. If you casted Harley and Mason in a movie of When Its Least Expected who would play their roles?
I honestly don’t have a clue, lol. There really are no actors or actresses out there that I know of who would fit the roles of Harley and Mason. These characters are just two people in my head who are very distinct looking in their own non-Hollywood sort of way. 3. Anything New in the works?
Right now I am feverishly working on book two in the Perfect Timing Series. (David and Abigail’s story) I also have my first YA paranormal romance coming out June 14th and I’m working on the sequel to that one as well.

4. What do you like to read?
I have sooo many genres that I love to read. First and for most is YA contemporary or paranormal romances. Then after that? Just about anything – as long as it has a good, solid romance in it. But I am a sucker for swoon-worthy heroes who like to get emotional with their ladies, and girls who start out weak and annoying, but grow into someone I admire and would want to be friends with.

5. You just ran into someone you have a major hollywood crush on. Who is it?
Channing Tatum . . . sigh Sweet Jesus, if I ever met that guy then I’d probably lose my ever loving mind!

6. Do you have any advice for amateur writers?
I’m still amateur I’d say, so the advice I would have liked to heard would be as follows
1. Get tough, and blow off the mean people out there who knock you down.
2. Write when you can, but don’t stress yourself out doing it. You have to write when you feel it. Don’t just write to meet a deadline, or just to get the book out there.
3. Pick a publisher you can trust if you go that route. Don’t settle for the first one that comes along, unless you know them through someone else, or they have a good name for themselves. I know from personal experience that one bad publisher can almost ruin the whole experience for you as a writer.

7. Where did you come up with the Idea for When Its Least Expected?
I do believe you are the first person who has ever asked me this! Yay! I love this question.
Okay, so my heroine has a twin brother. I got that particular idea from my hubby who just so happens to be a twin too. I used a lot of his experiences and such with his brother, and kind of just went with it in my own way.
I’ve always been in love with the idea of surfing. It’s just beautiful to watch. I actually studied so many surfing videos on YouTube that my family got really annoyed with me – especially my hubby, lol.
Finally the heroine, Harley, is me in some ways, as a teenager. Some of the things that she suffered through, I actually dealt with my own self. Not the traumatic issues, but the depression and the anxiety. A lot of people out there don’t like a weaker heroine, but nobody truly knows what it’s like to live through those emotional circumstances until they’ve experienced them, or know someone who has experienced them. I just wanted to write Harley the way I felt she needed to be written.

Heather Van Fleet currently resides in northern Illinois, with her three daughters, Kelsey, Emma, and Isabella, and her fabulous hubby (and high school sweetheart) Chris, with whom she’s been blissfully married to now for ten plus years. She’s a stay at home mom by day, and an avid and completely obsessive writer and reader by night.

Where you can Find Heather!


Posted by Le'BookSquirrel at 7:12 AM