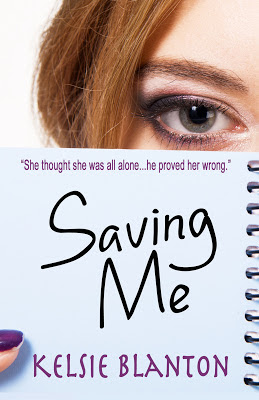 Blurb:
Sixteen-year old Peyton Jones had it all: straight A's in school, the perfect boyfriend, and nothing to worry about but keeping her GPA up. Then one night her perfect world is suddenly ripped away from her. Everything she has ever known changes and she goes from having a perfect plan to watching her world crumble around her.

Steve Gibbons was the quarterback of his high school football team...until the new guy showed up and stole his spot, causing him to lose his chance at a scholarship. Football was his life and now he feels like he has nothing.

Drawn together after losing hope for their futures, Peyton and Steve become best friends, but as they grow closer, a colossal secret is revealed changing everything. Will Peyton be left to face her inevitable future alone, or can she trust enough to let someone else in?

Author Bio:
Kelsie Blanton is a fun-loving young woman from a small town in Kentucky. Writing has always been her passion and when she’s not working at her full-time job, she is at home writing on something. Her hobbies include reading, writing, singing (poorly), dancing (again, poorly), and talking…a lot.
Surrounded by amazing friends and family that support her, Kelsie is following her dreams. Happy reading!

EXCERPT:
I froze, too afraid to move. The steps began to get louder as each second passed. My heart was pounding to its own quick rhythm. A hand grasped my shoulder and I squeezed my eyes shut expecting the worse. I began to quiver uncontrollably, wanting to scream, to run as hard as I could, but my feet were frozen. I could only stand there as my tears mixed with the rain pouring over me.

The grip was released, and suddenly an arm snaked around my back turning me in the opposite direction. I couldn’t muster up the courage to look at the person helping me. I could only assume it wasn’t Aaron. Whoever it was had too gentle of a touch. Yet instead of feeling relief a sense of nausea washed over me. Granted, I was momentarily safe, but the emotions coursing through me had made it—for a brief moment—feel like it was happening all over again.

I didn’t want to be vulnerable in front of anyone who could take advantage of me. With my heart going 100 miles per hour in my chest, I tried to push away from the person and nothing happened. They didn’t budge and their grip around me was too strong. After many deep breaths, I got the courage to glance up into eyes the color of emeralds—eyes filled with concern. My legs gave out and I sagged in his arms. Steve didn’t hesitate. He slowly lowered me to the wet asphalt and sat there while I sobbed into his already wet shirt.

Posted by Le'BookSquirrel at 7:11 AM