*COVER REVEAL* Smash Into You By Shelly Crane 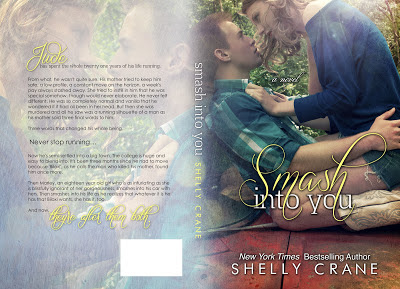 Smash Into You
By Shelly Crane
Release Date TBA
Blurb

Jude has spent the whole twenty one years of his life running. From what, he wasn't quite sure. His mother tried to keep him safe; a low profile, a constant move on the horizon, a week's pay always stashed away. She tried to instill in him that he was special somehow, though would never elaborate. He never felt different. He was so completely normal and vanilla that he wondered if it had all been in her head. But then she was murdered and all he saw was a running silhouette of a man as his mother said three final words to him. Three words that changed his whole being.
Never stop running…
Now he's semi-settled into a big town. The college is huge and easy to blend into. It's been three months since he had to move because 'Biloxi', as he calls the man who killed his mother, found him once more.
Then Marley, an eighteen year old girl who is as infuriating as she is blissfully ignorant of her gorgeousness, smashes into his car with hers. Then smashes into his life as he realizes that whatever it is he has that Biloxi wants, she has it, too. And now, they're after them both.

Excerpt
And now, as I stared out into the dark rain to see a POS car sideways in the road, I knew the world hated me, had to, because someone had just smashed her car into my truck.
I got out and braced myself. It wasn't easy to pay cash for new cars every time I needed to skip town. It was hard living when you couldn't be who you really were. Finding people to pay you under the table was almost impossible these days.
I groaned and glared at the beauty standing at the end of my truck. "Look at that!"
"I'm so sorry," she began. I could tell she really was, but I was beyond pissed. "I'll call my insurance company right now."
That stopped me. "No!" I shouted and she jolted at the verbal assault. "No insurance."
"Well," she pondered, "what do you mean? I have good insurance."
"But I don't."
She turned her head a bit in thought and then her mouth fell open as she realized what I was saying. "You don’t have any insurance, do you?"
"No," I answered. "Look. Whatever, we'll just call this even-steven, because you did hit me."
"Even-steven my butt!" she yelled and scurried to jump in front of me, blocking my way.
"And what a cute butt it is."
Even through the noise of water hitting metal, I heard her intake of breath. The rain pelted us in the dark. I hoped no one came around the corner. It would be hard for them to see us here in the middle of the road. She might get hurt. Then I wondered why I cared.
"Look, buddy," she replied and crossed her arms. It drew my eyes to her shirt. My eyes bulged 'cause that shirt…well, it was see-through now. She caught on and jerked her crossed arms higher. "How dare you! You're on a roll in the jerkface department, you know that!"
"My specialty," I said and saluted as I climbed in my truck. "Get your pretty butt in your car and let's pretend this never happened, shall we?"
Because if cops and insurance were brought into this, I'd be on the run sooner than I thought.
She huffed. "Excuse me-"
"Darling. Car. Now." She glared. "Like right now."
She threw her hands up in the air and yelled, "I knew chivalry was dead!" before climbing in her car and driving away. She didn't know it, but I was being as chivalrous as they come. I made sure she got out of the rain and back into her car, even though she didn't like the way I did it, and I got her as far away from me as I could.
In my book, I deserved a freaking medal for being so chivalrous. Because people that stuck with me didn't live long.
Just ask my mom.
Oh, wait, you can't. She died long, long years ago saving my life. I refused to bring anyone onto this sinking ship with me. If it finally did go down, I was going down alone.

MY SOCIAL MEDIAS and such
https://www.facebook.com/shellycranefanpage

Posted by Le'BookSquirrel at 7:29 AM