*REVIEW*Saving Me By Kelsie Blanton 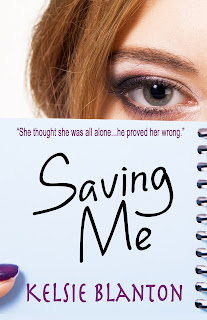 SAVING ME
By Kelsie Blanton
Sixteen-year old Peyton Jones had it all: straight A's in school, the perfect boyfriend, and nothing to worry about but keeping her GPA up. Then one night her perfect world is suddenly ripped away from her. Everything she has ever known changes and she goes from having a perfect plan to watching her world crumble around her. Steve Gibbons was the quarterback of his high school football team...until the new guy showed up and stole his spot, causing him to lose his chance at a scholarship. Football was his life and now he feels like he has nothing. Drawn together after losing hope for their futures, Peyton and Steve become best friends, but as they grow closer, a colossal secret is revealed changing everything. Will Peyton be left to face her inevitable future alone, or can she trust enough to let someone else in? http://www.goodreads.com/book/show/17670023-saving-me

Im so torn on this review.On one hand I liked the book and on the other hand I see a book with potential that needs some work.This is the story of Peyton who had everything and then it is taken from her in one night.Steve comes to her rescue and they are both drawn to each other.Deep Breath.Okay I believe this book has potential to be a 5 star book,Right now It is not,in my opinion.Here are a few things that need to be fixed.Steve needs to have more background in the story and I dont know,more ooomph.He just appears almost out of thin air is this perfect guy.There is hardly any interaction between Peyton and Steve and suddenly he is proclaiming his undying love.Being a rape victim is a very hard subject to write about even for the seasoned author.I just had major trouble connected to the emotion or lack of emotion in the book.Parts of this were written very well and other parts were lacking.I can understand why Peyton wouldn't press charges but she really should have..I mean how much can a guy terrorize her before she does something?I feel Saving Me could use a bit more depth to the story,The story is there and its a really good start but it just needs something more.I also really really found it hard to read Peyton's Diary,It was like reading the entire chapter summed up after every single chapter.I thought Peyton would have grown up a bit but she was still seemed so naive. This book is good and Im hoping by giving constructive criticism that the author will take it and use it for her next work.
Posted by Le'BookSquirrel at 7:56 AM