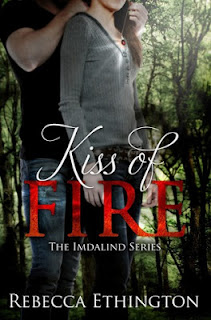 Kiss Of Fire
By Rebecca Ethington

Joclyn has a mark.She came upon that mark as a small child and it put her in the hospital.She hides it and hides herself in hoodies.Her mother is a cook and her best friend,Ryland is the owner of the house's son.Who wants Ryland to have nothing to do with Joclyn.Joclyn has no idea the birthday present her absent father gave her will change her life forever.Her life now has different meaning.
I am in Utter Book Bliss.You know what im talkng about..I have this goofy grin on my face and im all giggly.This is the first book in the Imdalind Series,The second book is Eyes of Ember.I have no idea where Rebecca Ethington has been hiding herself but she needs to come to center stage.This series is a MUST read.Im serious and this is only the first book!An amazing start to an amazing series.Thank You Rebecca for writing an amazing book and series.Thank You for putting a book into this world that has the ability to make the world disappear.

Posted by Le'BookSquirrel at 7:39 PM