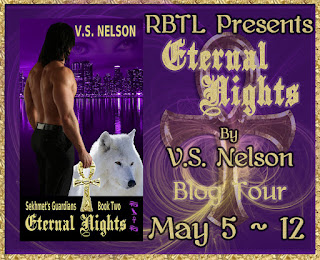 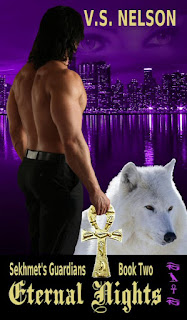 Title: Eternal Nights
Author: V.S. Nelson
Series: Sekhmet’s Guardians Series Book 2
Genre: Paranormal Romance
Publisher: Self Published
Release Date: May  2013
Formats: Paperback/Large Print Paperback/E~Books
Synopsis:
Central Theme
To save the small infant’s life, Chenoa, her grandmother, did the unthinkable. She merged her life force with a tiny wolf cub then gave the cub to Jennifer, her other grand daughter to take care of. Too bad, Chenoa died before she was able to undo the spell or tell anyone what she had done. For twenty years Jessica watched the world pass her by through the eyes of another creature. Most of the time, the things humans did didn’t concern her, unless of course they told her to get off the couch or sleep on the floor. Thank the heavens above for Jennifer, who still doesn’t know who she truly is, or she’d still be eating raw meat.
Jessica was content and happy for the most part until she laid eyes on Raphael who came to pick her up from the wolf rescue center a few weeks ago. Since then, her primary focus has been to stay by his side and find away to undo her grandmother’s powerful magic.
In the meantime, Jessica has developed her natural Selkie abilities and has started communicating with Raphael. At night while he sleeps she enters his dreams under the pretense of what she should be – a human woman who has two arms to hold him and stands on two legs, not four.
Convinced he is going mad; Raphael privately searches for the angel who haunts his dreams. With an ivory face as soft as velvet, radiating both pure innocence and sexual seduction at the same time, what else could she be if not an angel? His search is interrupted when the Guardians discover the Legions latest endeavors; they’re kidnapping unprotected women and lifemates across the world. A call goes out and the Guardians once again implement their recruitment policy. The war is escalating.
Raphael takes Nowaki, Jennifer’s wolf with him to interview prospective candidates. Board with interviews he decides to take Nowaki on a run in the forest. Taking a break from running they stop by a near by stream. He doesn’t hear the gunshot but feels the blast as it hits his chest and falls to his knees.
Nowaki takes off after the assailant and gets her revenge but not until after the attacker mortally wounds her. Jessica takes over Nowaki’s body and pulls herself back to Raphael convinced they will die together. Lying on top of him to keep from getting cold, she has in reality, saved his life. The blood from her wounds drips down into his open mouth.
Jennifer along with Gabe, Thomas, Michael and Roger arrive on the scene. Michael tells Jennifer,” he’s sorry but Nowaki won’t make it back to the helicopter, much less the compound.” Jen, who was visited by Chenoa the night before now knows about Jessica and Nowaki but has yet to say anything to anyone. She shares her secret with Michael who immediately steps in and attempts to save the wolf. They all make it back to the where surgery is performed on both Raphael and Nowaki. Jennifer shares her grandmother’s secrets with Alice, her best friend, and Gabe.
When Raphael wakes he demands to go back to the forest. His Angel saved his life and no one will believe him. Gabriel finally tells him the truth, Jessica, his angel, and Nowaki are one in the same. The only problem is how to separate the two?
Chenoa shared a bit more with Jennifer… They must return to the cabin where Jessica was born in California and Jennifer must complete the ritual. Only problem is, she doesn’t know how. She waits for her grandmother to show her what to do.

(1)  While they wait for Chenoa to reappear the Guardians rescue several women from the Legion and bring them to the estate where Michael can care for them.
(2)  Ronan, Jennifer and Jessica’s, Selkie father has an adverse reaction to the scene and everyone witnesses Selkies are not always the gentle creatures they appear to be.
(3)  Michael believes they brought an air born virus into the compound with the women. All of the men are ordered to take up residency in the barracks since they are the only ones showing signs of infection. A female physician is brought in to care for the women. She soon discovers one of the women is not what she appears to be. Although human in appearance, Tshering Snow’s blood is feline in nature and she is in heat.
(4)  Gabriel distraught without Jennifer decides to make something for Raphael and him to eat, only to destroy Jennifer’s new kitchen in the process.
(5)  Ronan and Jessica continue on with their romantic relationship.
(6)  Legion soldier Alan Roberts turns coat and returns Guardian soldier Peter Armstrong and his love interest, ballet dancer, Alison to the Guardians. He waits to hear the Guardian’s decision—will he be put to death or not?
(7)  Lance is captivated by the lovely Tshering Snow.
A small group consisting of Jennifer, Alice, Gabriel, Raphael, Michael and Nowaki head to the Sierras to find the location where Jessica was born. The group sits around the campfire drinking their morning coffee when Nowaki is attacked by a cougar. Jennifer has no choice but to do the ritual without any preparation. She falls to the ground and passes out once the ritual is completed. Nowaki and Jessica are both bleeding out from wounds received by the cougar. Rather than take Jessica back to the motor home, Raphael asks her for his forgiveness and bites into his own wrists and forces his blood down Jessica’s throat in an attempt to save her. He is successful but is worried about the repercussions—will it bind them forever? The group spends an additional week in the mountains where Jessica learns how to walk, eat and be human. It’s soon discovered that Jessica is mute although she has no problem communicating with anyone; she merely utilizes her natural Selkie ability.
Upon returning to the Illinois, Jessica and Raphael are finally lifemated but not before they must overcome another language barrier. 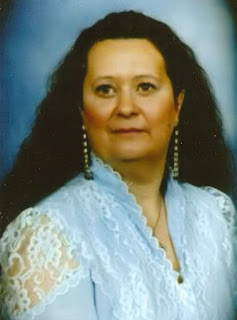 V.S. Nelson has always enjoyed reading stories with strong relationships and happy endings so it’s not surprising she found herself writing across the romance genre. Even her commercial fiction, Sins of a Man, the memoirs of a Mafia Hit man, is layered with romantic elements.
Landing in Arizona, after an exciting teaching career, which took her to the Middle East for several years, she lives in Arizona where she spend most of my time making love to her computer while writing, editing or researching, seven to ten hours a day. The days she’s not writing, you will find her with my critique partners at Starbucks, attending or presenting a workshop or at a RWA meeting.
Being a Native American woman and a Scorpio, she’s always had a fondness for history, mythology, the occult, and the unexplained events which have occurred on this world we call home. It was no wonder she found herself writing a paranormal series.
She enjoys hearing from readers, fans and people with similar interests. They are more than welcome to contact her through her website http://www.authorvsnelson.com

Excerpts Please Choose Only One

Carl reached into his chest pocket and pulled out two folded 8 x 11 sheets of paper, unfolded them and placed them on the table in front of Gabriel.
“Here’s the weird part. The letters are identical. The only difference in them is the name.”
Reaching down and picking up one of the letters, Gabriel began to read it out loud.

Dear Carl,
I have decided I am not ready for a relationship. I am moving away, so please do not try to find me. I hope you have a good life. Good bye.
Sincerely, Jane

Gabriel picks up the second paper and looks at it.

Dear Mike,
I have decided I am not ready for a relationship. I am moving away, so please do not try to find me. I hope you have a good life. Good bye.
Sincerely, Mary

Gabriel held the two letters side by side so everyone in the room could see them. If they had been hand typed
he would have swore they were written on the same typewriter—even the spacing was the same.
So what are the odds two different women in two different cities would write the exact same Dear John letterto their boyfriends? Zip. Nadda.

“Lance, send out an inquiry to everyone; civilians included. See if anyone else has recently received an unexpected Dear John.”

Posted by Le'BookSquirrel at 10:53 AM