Butterfly Kisses By Mia Castile has a BRAND NEW COVER!!!!!!

GUESS WHAT!?!!?!?Butterfly Kisses By Mia Castile has a BRAND NEW COVER!!!!!!!!! Its totally amazing and wonderful!!!! 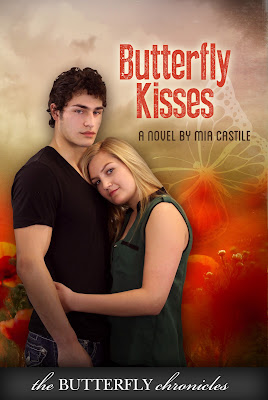 Everything changed for the Baxter sisters last spring. Lacey blew it with Henry her lifelong crush, only to discover a blooming relationship with her best friend, Chase. While he picked her up and put her back together, they grew closer over the summer. Now that school has started, he’s found popularity thanks to his band Cate’s Ashes, and he’s hiding secret phone calls and text messages. Plus, did his ex-girlfriend just appear out of the blue at his show? Forcing Lacey to wonder if he’s over the feelings he pronounced for her at the beginning of summer. Add to the tension, a realization and secret of her own to keep about her worse enemy. Lacey vows to be the bigger person and keep Byron’s revelation, but what will it cost? Meanwhile, as Lana tries to find herself again after her suicide attempt, she’s befriended by the school’s resident bad girl, Britt, and new chicano boy, Tomas, in the same week. Britt offers unconditional acceptance that Lana didn’t realize she craved, while Tomas brings out the best in her, and makes her feel alive again. Britt is dangerous and daring, while Tomas exudes security and safety. Vices come easily when you are already addicted to something you crave, and Lana muddles through figuring out who she wants to be. With their parents constantly arguing, and their dad moving into the guest bedroom, the pressure on the girls may explode destroying them all. Is there a place for happiness when their world is crumbling around them?
Posted by Le'BookSquirrel at 7:05 AM