Becoming A Butterfly by Mia Castile has a NEW COVER!!!!!!!

I AM SO EXCITED ABOUT THIS NEW COVER FROM MIA CASTILE!(So excited I had to do SHOUTY CAPITALS!!) This cover is beautiful and the story inside it beautiful.To be honest the cover could be a blank page because the writing speaks for itself.However we are LUCKY that there are covers because they are GORGEOUS!!!Without Further Ado...


Did you know this is a series?

About a Girl named Lacey?

About a few Guys  named Henry 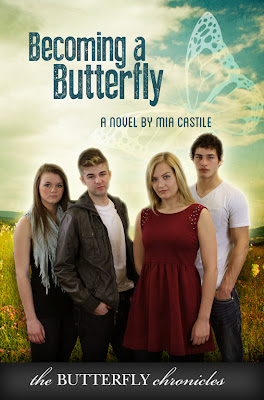 Synopsis:
Sixteen year old Lacey was never the center of attention, unless she was tripping, stammering, or being deposited into a pool by the local popular kids. All she wanted was to fit in, until one night when everything changed.
Jade and Tasha, her two best friends, helped her create an online personality that was everything she wanted to be– and it was only the beginning. In doing so, she attracted the attention of Henry, her lifelong crush and next door neighbor. Unfortunately, it was Farrah, her online personality and not herself, he was interested in.
She also attracted Chase, the brooding, quiet, anti-social new kid of Brownsburg High School, who easily figured out her secret and blackmailed her. They forged a friendship that was both unique and complicated.
Lacey must decide if revealing herself to Henry and her entire school as the cool, charming, and funny Farrah is worth possibly losing him forever. She finds herself needing to make an even harder decision than she ever thought possible. When did the lines between truth and lies get so blurred?

Becoming a Butterfly is a story about coming of age and finding yourself when you never knew you were lost.


**This is a MATURE YA FICTION SERIES.**
Posted by Le'BookSquirrel at 7:02 AM