*Cover Reveal* Hard to Hold On By Shanora Williams 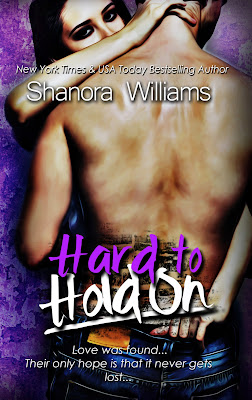 Hard to Hold On
By Shanora Williams

For the past four months, Natalie Carmichael and Nolan Young have been complete. Everything still feels right in their passion-filled world. It still feels natural - that is until Nolan's mother passes away.
Things begin to turn for the worst for Nolan and his brother Mills. After losing their father from previous years before, it's a tragedy on top of a tragedy. Along with the loss, Natalie and Nolan will face obstacles that they aren't so sure they can handle.
From the New York Times and USA Today Best Selling novel, Hard to Resist, Natalie and Nolan will realize that there is something in their relationship that will have them either wanting to run away or trying to stick through it.
Will Natalie and Nolan stick together? Can they hold on to what they've worked so hard to keep going?
Love was found. Their only hope is that it never gets lost 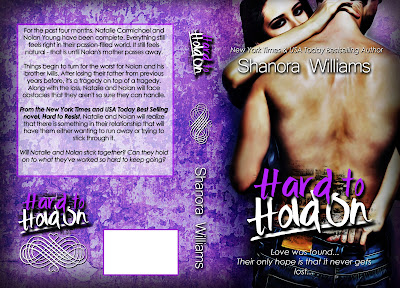 Nolan’s hands work their way down to my jeans and he unbuttons them. My back arches, allowing him to continue. He slides my jeans off before crushing my lips with his. I shut my eyes, ready to enjoy the feeling. I’ve wanted this for so long.
His finger sneaks beneath my panties and slowly slides into me. I moan and he groans as he rubs the flesh between. I pull his head down to kiss him again—to keep the intimacy going. His tongue plays and coaxes mine. I hear his belt buckle jingle and he adjusts himself to get his pants down but our lips never part. He presses himself against me and my stomach tightens. I grip his T-shirt but he pulls back to tug it over his head.
He glares down at me, as if I’m the only person on this entire planet that he wants. He’s all that I want. I know that he feels the same way. Leaning down, Nolan’s lips press against my neck and then kiss their way down to my breasts. He tugs my shirt over my head, pulls my bra down, and then licks my nipples. Heat sparks and I feel myself building up. My eyes squeeze shut from the erotic feeling. His mouth is like magic as it licks and sucks. He begins to move southward, and my legs tighten around him but he presses his palms against the inside of my thighs to keep me still and available to him.
I look down and watch as he bites on his bottom lip while pulling my panties down. Quickly, his hot tongue slides between my slick folds and I gasp through my teeth as he swirls it around my sweet area. I can really feel myself building up now. I want nothing but him inside of me—nothing but his hard body against mine. I want to mold and fill the room up with our steam and sweat.
My moans and pants pick up and then he pulls back. “Not yet,” he says against my lips.
Posted by Le'BookSquirrel at 7:59 PM