*REVIEW* By My Side By Stephanie Witter 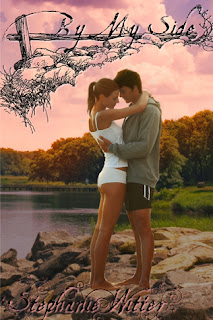 By My Side
By Stephanie Witter
Release Date:March 17 2013

Lily Saunders sees her family falling apart. Her father is deserting her, and her mother is drinking more and more. Even sarcasm can't help Lily. When she thinks her best friend, Andy Green, will help her, she discovers how his blinding jealousy will mess everything up.

And then Gabe Green comes back home. She thinks it'll be like always between them—sarcasms and curses thrown at each other—but she's mistaken. He's different, and understands right away the problems she's trying to keep for herself.

This book is about Lily and her dealing with her father leaving and her mothers reaction to it.Her best friend is Andy and he suddenly starts acting super jealous when his brother Gabe comes home.Gabe and Lily have never gotten along but things are going to change this year.
This book was emotionally well written .It felt sometimes like there was quite a bit going on.From Lily's mom becoming an alcohlic to her dad leaving to Gabe and Lily's new relationship.There is ALOT going on.I think sometimes it isnt clear how much time had passed in the book and that was a tiny bit confusing.I did not understand why Gabe and Lily had so much drama all the time either.I mean here this girl is going through something horrible(I wont mention what due to it being a spoiler) and then the 2 of them break up not once but about 3 times.I just wanted to yell at them to stop acting so immature.The writing was great and its definitely a book to read.I really enjoyed the ending and would love to see a second book or a novella continuing Lily and Gabe's life in college.All in All a great read and one you will want to pick up the next time your looking for something to hunker down on your couch and read .Job Well Done Stephanie Witter.

Posted by Le'BookSquirrel at 8:48 AM

Email ThisBlogThis!Share to TwitterShare to FacebookShare to Pinterest
Labels: 2013, Amazon, By My Side By Stephanie Witter, goodreads, LeBookSquirrel, new release facebook, review