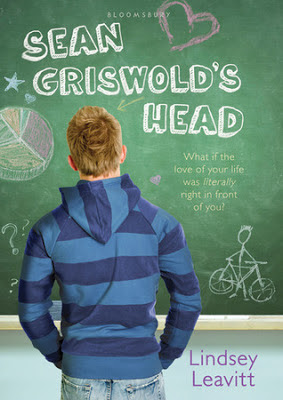 You can look at something every day and never really see it. Payton Gritas looks at the back of Sean Griswold’s head in most of her classes and has for as long as she can remember. They’ve been linked since third grade (Griswold-Gritas; it’s an alphabetical order thing), but aside form loaning Sean countless number-two pencils, she’s never really noticed him.
Then Payton’s guidance counselor tells her she needs a focus object--something to concentrate her emotions on while she deals with her dad’s multiple scleorsis. The object is supposed to be inanimate, but Payton chooses Sean Griswold’s head. It’s much cuter than the atom models or anything else she stares at! As Payton starts stalking--er, focusing on--Sean’s big blond head, her research quickly grows into something a little less scientific and a lot more crush-like. And once she really gets inside his head, Payton also lets Sean into her guarded heart. But obsessing over Sean won’t fix Payton’s fear of her dad’s illness. For that, she’ll have to focus on herself.
----------------

Payton is a fifteen year old girl in high school who is given some heartbreaking news about her father being diagnosed with Multiple Sclerosis. She does not take the news well and starts acting out and is sent to the school counselor who has set her up with a Focus Object project.She chooses The Back of Seans Head. Eventually she grows to want to know more about Sean and starts somewhat stalking him,With the help of her Friend.Dealing with her new Crush,Her Dads Illness and life gets to be alot for Payton to handle.
What a great book on growing up,dealing with illness and finding love.I do think Payton was immature in some ways..but she is fifteen.I Liked the idea of using someones head as a focus object but then it becoming more.I do like that the book flowed very well.The characters could have used a bit more development though.I think this topic was handled well and I look forward to reading more by Lindsey Leavitt.

Posted by Le'BookSquirrel at 8:20 AM