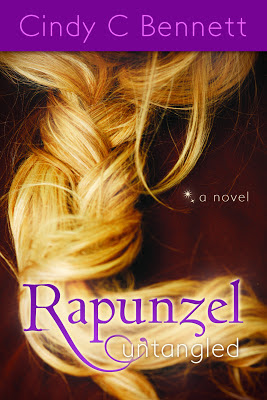 Told that she must be indoors at all times, Rapunzel feels trapped in the huge mansion where she lives. But when school demands to allow her access to the Internet, she discovers Facebook and becomes friends with Fane, a local teenager who changes her whole world. This story will have you entangled from beginning to end.

As I sit here and Write this Review the Irony that I watched Tangled this afternoon prior to reading this(Totally not planned)Is not lost on me.I have had a day filled with Rapunzel! Rapunzel Untangled is a modern day version of the classic Rapunzel.I have been looking forward to Cindy's latest work for awhile now,So when I was given an ARC I was ecstatic.Cindy was able to bring this classic straight into 2013.I wondered how she would be able to have Rapunzel in a tower in such a Modern Day setting.Rapunzel is forced to stay in her rooms due to a "sickness" that her mother says she has.She has never been outside or around people.What a bad life for poor Rapunzel.Then she finds Facebook,Glorious Facebook.On facebook she Friends Fane..and with that her world is changed.I won't give any spoilers away.I will say since I watched Tangled first I couldnt get the male character out of my head so he became Fane.I really have no complaints about this book.It was great.Not overly long and Not too short.Just right.The dialogue between Rapunzel and Fane is hilarious.I honestly would love to see some other fairy tales redone by Cindy.But anything that Cindy Writes turns to gold so Now I shall not so patiently wait for her next release.Tick Tock Tick Tock.Anyways..go read it.Seriously.You will not be disappointed.
Posted by Le'BookSquirrel at 7:32 AM