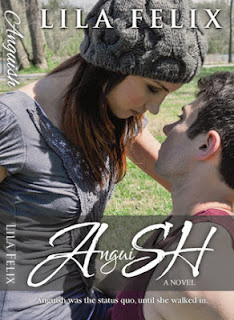 Anguish was the status quo, until she walked in.
Breaker James Collins is confined in a prison of his own making. Scarred doesn’t begin to define his hell since finding out his girlfriend had cheated, stolen, and lied two years ago. It led to a single event—one that would blacken his days and his nights from then on. Since then, he hasn’t left his house, crippled by fear of people and any social interaction.
Ashland talks too much and has the voice of a meth-laden prairie dog, or so she’s always been told. She’s been called annoying and irritating all of her life and gave up on having friends for a long time. College has given her a new lease on a social life and she’s embraced who she is. But now she’s waiting for the one guy who can take her breath away and put up with her antics.
A simple note pinned to a corkboard will lead Ash right to Breaker’s solitary world and she will learn that just because a guy doesn’t fit her ideal, doesn’t mean she won’t fall head over feet in love.

Anguish is the story of Breaker Collins,He suffers from panic disorder,agoraphobia and anxiety.His mom goes to his house one day and sees how badly he has let the house go and she puts out an ad for a housekeeper.Enter Ashland.Ashland needs a job and applies for this job. Ashland is shocked when she first see;s Breaker.Shocked in a good way.
I enjoyed Anguish,I can relate to Breaker for several reasons.Dealing with Panic Disorder and Agoraphobia is something I have actually dealt with.Lila nailed the feelings that associate with it on the head.I think I would have liked to get to know Ashland a bit more.I was confused with how she was stated in the blurb and I expected a shy girl who didnt have friends,but what I got was a girl with confidence and then some.In the book I felt I wasn't able to emotionally get on the same level with her.She almost felt like a guy in that respect.She was sometimes really blasé about somethings that I wanted her to pull herself in a bit more.Breaker felt far more romantic then Ashland did and usually its the other way around.I just feel it could have used a little more Ommph. I loved the ending and specially that it had a happy ending and an Epilogue.Have I mentioned how much I love Happy Endings and Epilogues?I Love Lila Felix's books and as always look forward to the next one!
Posted by Le'BookSquirrel at 9:06 AM