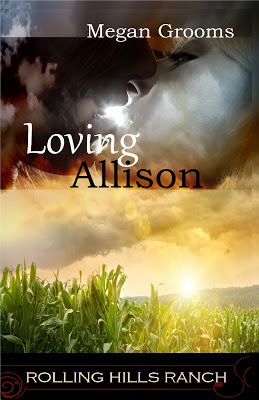 Book Blurb
Allison met her best friend Jasmine’s brother once a year ago and kept in touch with him since When she is asked to help Jasmine plan a wedding at the ranch she jumps at the  to see John again
The only woman John has thought he could be with forever is his sister’s best friend. When he sees her again he realizes this is the woman he wants to marry and be with forever.


That is if Allison’s protective nature doesn’t kill her first.


A van pulled up dirt flying behind it. It had been such a dry summer already, they were lucky the crops were still growing. He didn’t have long to think that before his sister jumped out of the van and was running at him. He walked down the steps laughing. “You didn’t even shut your door.” She launched herself and he caught her like he used to when she was little. “You’re almost as tall as I am. He complained laughing and hugging her. “I’ve missed you little sister.” He sighed, it felt so good to be able to hug his sister. It had been far too long.


“I’ve missed you too.” She hopped down and looked up at him. He was just as big as ever. She was almost six feet tall he had to be six foot four.


John looked her over as only a big brother could. Her black hair was down shining as usual her naturally tan skin looked flawless as ever. His sister had always taken good care of herself. She looked a little too thin for him though. She smiled as he watched her, her black eyes crinkling a little.


“I eat just fine.” She said punching his shoulder. “I know that look you’re trying to figure out, how to fatten me up.” She laughed and it made John smile. It had been so long since he’d heard that laugh. “Come on Allison.” She glanced behind her to see her friend was still in the van just watching them. “You remember Allison don’t you?” She had to look back at him to see his reaction as Allison climbed out of the van slowly.


John looked up and his breath caught for a moment. He had forgotten how beautiful she was. Finally finding his voice he mumbled an “of course how are you?” He felt his heart jump when their eyes met. Her blond hair looked good in the pixie cut that it was in now. She smiled shyly and he saw one dimple. He couldn’t remember if she had two and found himself wanting to make her smile enough to find out. Her skin was so white he worried about her burning and found he wanted to make her come out of the sun. She was short compared to everyone else and had wonderful curves that he knew she was self-conscious about. He reminded himself to tell her how beautiful he thought she was when they were alone.


“Hi John.” She answered smiling a bit. She felt so nervous. She had told him some very personal stuff in her emails. It was odd how daring she was when she wasn’t looking at him but now… She couldn’t believe he knew that stuff about her. She hadn’t thought about seeing him after telling him. She looked into his eyes and forgot all of that. All she could think about was him and how handsome he was. She couldn’t seem to pull her eyes away from his.


His sister elbowed him making him look away from the beauty of Allison. “Are you going to help us with bags or make us do it?” She asked raising one eyebrow at him.


John knew he had been caught and felt his face burn with embarrassment. “Why don’t you drive the van down to the house you used last time you were here? Joe do you wanna help me get everything inside?” John asked, as soon as he was done talking to his sister he looked back at Allison seemingly unable to stop watching her.


He heard movement causing him to look away again. Joe had come off the porch and was standing near him a smile playing on his lips. Sam had the same damn smile, like the cat that had eaten the canary. They all knew, it would only be a matter of time before his sister found out. If she hadn’t already figured out what was going on. She was pretty smart like that. He guessed it came with being a wedding planner. He shrugged and figured there wasn’t any way he was going to be able to hide it if he couldn’t even take his eyes off her. He decided to hell with it. He didn’t really care. If his sister had a problem with it he was sure he would find out soon enough.


“That sounds good. Are you Sam?” Jazz turned to the girl next to John. It was clear that her brother was going to be paying more attention to her friend this visit than to her. Honestly Jasmine didn’t mind though. She decided she’d wait until her brother brought it up to her though.


“Yeah, that’d be me. Thank you so much for coming.” She walked up and shook the girl’s hand. She couldn’t believe how much the two looked alike but yet so different. Where John was big and bulkily she was slim and delicate. Sam decided that it was because of the hard muscle building job that John did on a daily basis. Sam was glad that she had been told so many times that Luke hadn’t looked at anyone until meeting her. She could admit to herself that if she hadn’t, she would be grilling Luke about what he thought of Jasmine. The woman was gorgeous and she would have been jealous that Luke had already met her and possibly tried to hit on her when she had visited before. Sam shrugged, it wasn’t new to her that she was jealous of other women knowing Luke better than her. She had run into a few women in town that knew him well and had been jealous. Luke thought it was cute.


Jasmine looked at the woman. She certainly didn’t look like someone that would want to plan a wedding. Most of the women that were bridzillas were very conscious of their appearance. Not wanting to get dirty, having to have their hair, nails and makeup done. Sam didn’t look like she had done any one of those things. Her long brown hair pulled back in just a ponytail, no makeup and her hands had clearly seen some rough work. She could tell when they shook hands that they were tough. She smiled realizing that this wedding might be the easiest one she’d ever done. “Don’t worry about it I’m excited to start my own business. We’ll meet you down there ok?” Jasmine looked at her brother to find him and Allison still looking at each other. She shook her head and ran back to the van and climbed in.


Allison gave one last look at John before climbing in as well.


“Not one word.” John threatened as he watched the van back out before taking off after it. He could hear Joe and Sam laughing behind him.


Allison couldn’t believe how handsome John was. The way he looked at her just made her toes curl. She could barely get out a greeting to the man. His black hair, so much like his sisters, was a little longer than she remembered but it matched his bronze skin tone and was far from girlie. With his strong chiseled chin and thick neck you would never mistake him for a woman. His muscles still stood out like hard iron under smooth skin, she found herself wanting to touch those distinct muscles just to see how strong he really was.


“So what was that about?” Jazz asked her friend pulling her from her musing.


“I don’t know what you mean.” Allison was quiet by nature and she hated talking about anything relating to her personal life, especially any men in her life. She had always been that way but it was even worse when the man in question was her best friend’s brother.


“You, and my brother, we are best friends. I know you, something is going on… Do you like him?” The house wasn’t that far away she didn’t have time to beat around the bush.


“Your brother is very handsome.” Allison started, she paused thinking about how handsome he was. She shook her head “but I hardly know him.” She finished a blush creeping up her neck. Again she lamented how much she had told John in her emails. It was so much easier to talk over the internet than in person. She never imagined she would see him again. Though, honestly most of her dreams had her seeing him, a lot of him.


They stopped at the house and Allison opened the door quickly trying to get away from her friends prying only to smack John with the door. “Oh my God John, are you alright? I’m so sorry I didn’t see you.” She put her hand on his back as he was bent over. The contact sent a thrill through her. Her heart beat double time. She took her hand off him afraid of the reaction with such a small touch. He stood back up towering over her. Rather than make her frightened she found herself feeling safe and wanting to hide herself in his big strong arms.


“I’m fine Ally Cat.” He whispered looking down at her. He forgot the pain and that anyone else was near when he looked into her eyes again. He almost bent down and kissed her when a door slammed.


“Trying to beat up my brother?” Jazz asked laughing. Joe already had the back end open and was pulling out bags.


John shook his head giving Allison a small embarrassed smile before moving to the back of the van. It had taken longer than he would have thought with only two women but his sister had a lot of boxes for the wedding. “Why do you have a van?” He asked as they finished unloading. “You have a lot of crap.”


“Well that would be why I have a van. Need space for all this crap and it can’t get wet so, I can’t use a truck. I’m thinking of down grading though. I’ve offered the van to Allison, for her crazy idea of running a daycare. Why anyone would want to be around kids that much I have no idea.” She laughed putting an arm around her friend.


“I would.” John answered seriously looking down at Allison. She smiled a bit showing just the one dimple. He was going to have to try harder.

Give away....
Paperback copy of Finding Samantha, the first in the series, will be given away to one lucky person. To enter to win you must go to Goodreads http://www.goodreads.com/book/show/17927814-loving-allison and add Loving Allison to your TBR list. Entries between June 11th and June 25th will be entered for the drawing. The winner will be revealed on June 28th, my birthday on my website http://groomsbooks.wordpress.com and you will be contacted via Goodreads.