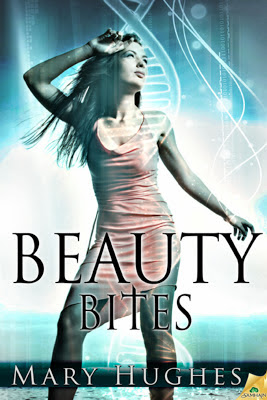 When top Minneapolis ad man Ric Holiday is asked to design a campaign for a quaint little town, his first reaction is absolutely not. Meiers Corners is too near Chicago, home of the vampire who turned him as an orphaned boy.

Then the city sends an angel-faced med student with a body made for sin to plead their case. Synnove Byornsson is the ray of sunshine Ric hasn’t felt since he was human.

Armed with determination and a micro miniskirt, Synnove is prepared to crash Holiday’s penthouse cocktail party—and to dislike him on sight. But Mr. All-Style-No-Substance turns out to have a deadly smile, a barely restrained, feral strength, and piercing blue eyes that look at her—not at her cleavage.

Unfortunately Synnove has competition in the form of a sly temptress with a counterproposal. For the first time in her life, Synnove must cash in her genetic lottery ticket and fire back with some sizzle of her own—or her beloved Meiers Corners could become the new Sin City.

Warning: Contains a doctor with a bod for sin, an ad exec with a chip on his shoulder, sarcasm, sex, and a cabin full of annoying friends. Secrets are revealed. One heart-stopping, horrific moment leads to the ultimate of happily-ever-afters.


It was all fun and games until the gun hit my skull. Thud. A bright pain cracked in my brain, telling me the mountainous hostage-taker had brought his own weapon to bear. Almost immediately something heavy plowed into us, spinning me away from the gun. I staggered to a stop. My sight cleared to Ric, wrestling the mountain. The big goon seized Ric with one arm, hugging him close like he was going to give him noogies. But the gun in his noogie hand made reality more chilling. Ric shimmered, and suddenly the mountain was holding a cloud of mist. Vampire fighting technique? I cheered before it occurred to me to wonder why Ric hadn’t used it before and why the shadowman helping us hadn’t used it at all. The edge of Ric’s mist caught a stray beam of sunlight. It instantly combusted—poof. My elation turned to horror. Ric snapped back into being like a rubber band. His cheek was seared open, exposing red muscle surrounded by blackened, bubbling skin. But he lost no time raising his bound hands, swinging, and whacked the bad guy’s head with fists like a mallet. The mountain swayed but didn’t go down. Ric spun, once, twice, winding up his whole body behind it, and whacked him again. Still the guy didn’t go down. My heart tripped double time. The mountain swept his gun toward Ric. I leaped at them. Went oof when I hit the shadow’s arm, stuck out like a bar. I folded over it like a cheap towel and staggered back. Ric slid into the rifle. The mountainous goon opened fire as Ric knocked the gun to the side—the side where the ogre-like head hostage-taker stood. Ogre Face ducked and covered. A spray of bullets rat-a-tat-tatted a line where his head had been. Ric chopped his forearms across the mountain’s right wrist. The mountain howled, both arms flying up in defense, right hand dangling with a protruding lump at the wrist presenting as broken. The gun fell to hang from its clip. The mountain groped for it with his left hand. Ric grabbed the big man’s balls. The guy shrieked. Ric wrenched. The mountain dropped, curling on the floor like a shrimp. Apparently Ric also had a grip like a nut crusher. “Stop!” I whipped around. Ogre Face pointed his gun at my head. He rasped, “You’re dead.” Terror burned that instant into my head like a snapshot. I stood facing the ogre. About ten feet separated us. Behind me was the hostage-lined bank of windows, the shadowman already running toward them. A few feet to my right, the mountain goon curled on the floor, Ric breathing deeply over him. Both Ric and I were too far away to stop the ogre from shooting. “Down!” The shadowman pushed hostages to the floor, starting with the ones in Ogre Face’s direct line of fire. Well, if you didn’t count me. Ric leaped. My knees started to bend. Ogre Face pulled the trigger. Ric wouldn’t hit him in time, even though he’d leaped before the ogre pulled the trigger. The gun went off.