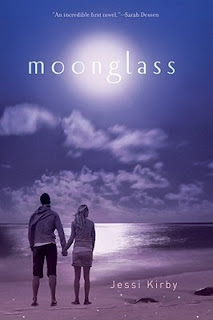 When Anna was little, she and her mother used to search for sea glass, but since they looked at night, they called it moonglass. Now, ten years after her mother's mysterious death, her father is working as head lifeguard on the same beach where her mother grew up and her parents first met and fell in love.
Reluctant to get close to anyone (including her father) and not pleased about having to start at a new school, Anna begins to spend more time alone, running the length of the beach and wondering about who her mother really was. After meeting a lifeguard named Tyler, she slowly lets her guard down and together they start exploring the abandoned houses that dot the beach.
But when learning more about her mother's past leads to a painful discovery, Anna must reconcile her desire for solitude with ultimately accepting the love of her family and friends.

Let me start by saying I enjoyed this book.I didnt love it but I enjoyed it. In the story you find Anna and her father moving back to where her mother and father met.Her father takes a job as I want to say Park ranger type.You get the feeling that father and Daughter both practically live in the water.Anna Meets Tyler who is a lifeguard on the beach where her father works and where she lives.I kept picturing in my mind Anna looking like Kate Bosworth in Blue Crush.I loved hearing about the Moonglass in the story(I wont ruin it..you must read to find out!) and the sea glass..I would love to find some!
A few things that bothered me about the book.While reading it kept a steady pace..the entire time I kept waiting for some sort of climax.Which, while it somewhat happened towards the end it felt rushed to me.I would have liked to explore Anna and Tylers relationship a bit more.I would have loved to have had Anna spend more time with her friends.The entire book kept mentioning Mermaids so much that half expected her mother to have turned into a Mermaid..but no it turns out she was mentally ill.I also wish the author had written a bit more on mental illness or Anna coming to terms with it.
Overall an enjoyable book that made me feel like I was a part of summer.If you want to read this book you can find MOONGLASS at amazon.

Posted by Le'BookSquirrel at 6:15 PM