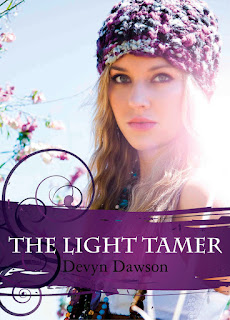 Jessie moved from New York to North Carolina one week after school let out for summer break. Her newly single mother and Jessie move in with grandma Gayle. Being a teen in a retirement area, is one more thing to add to her 'this sucks' list. It's bad enough to have to move, but even worse her alcoholic father left them as he went on a quest to be an artist in Greece.

Things begin to look up when she is reintroduced to Caleb, the dorky boy that saved her life one summer at the beach. Caleb is no longer scrawny and nerdy, he is now tall, dark and handsome. Caleb is a Light Tamer.

Jessie and Amber become fast friends. Amber is a no frills girl, her snarky comments and sassy attitude will raise a few eyebrows and have you laughing out loud. Amber is rough around the edges, a light tamer with only two years left to find the one she is bound to. Her father's surfing accident left her dad paralyzed and her brother dead.

This paranormal romance will keep you on the edge of your seat with humor, romance, and determination. Fall head over heels for Caleb and Jessie.

**REVIEW**spoilers in the 2nd chapter..
New Author for me AGAIN!What a great first book to read by Devyn Dawson.This book is the first in a Trilogy.It revolves around the lifes of Jessie,Caleb and Amber.Jesse moves to North Carolina with her mom to live with her grandma who does not like to be reminded that she is infact a grandma.While there Jesse learns some new and interesting things about herself and life isnt so straight and narrow as she though.I've read paranormal romances before and have never heard of light tamers so this is all new to me..Since it is new I wish there was just a few pages set aside so I knew what they were.Rather then explaining it half here and half there.Some of the wording was redundant,Jesse's use of Oh My Gawd got a bit annoying.I did enjoy her inner dialogue though.
Amber had me laughing the whole time..some of her comments were so perfectly timed and so snarky that you just had to like her because you know she didn't mean them.Caleb Caleb..he was all around a good guy..It felt as though he did no wrong..I would have liked to see more dialogue from him and maybe some of his inner thoughts.My only other fault with the book was the "fight" scene seemed rushed and then when Jesse had her issues with Clark it too seemed rushed and I felt broadsided I guess because we went from the fight to her losing her bond and becoming a different person..
Overall I really enjoyed it.I know I had a few issues with it but it doesnt mean I didnt enjoy it or fall in love with the start of this series.I look very forward to book 2 of the Light Tamer Trilogy.You can find it HERE on amazon.I hope you get sucked into Jesse and Caleb's story as well!
Posted by Le'BookSquirrel at 1:20 AM