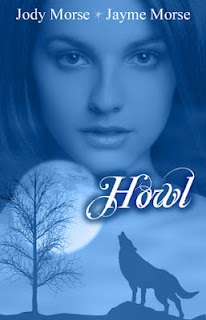 Fifteen-year-old Samara McKinley is not your average teenager. Unlike her best friend, Emma Taylor, Samara’s life does not revolve around partying and trying to fit in at school. In between playing the peacekeeper for her troubled family and crushing on the cute new boy at school, Samara sets out to stay to true to herself. But that all changes when she is bitten by a wolf. Samara begins living a double life – human by day, wolf by night.

As Samara watches her relationships with those closest to her fall apart, she finds refuge in the mysterious wolf that bit her. Determined to keep her alter-ego secret from her family and friends, Samara soon discovers that her family has a few secrets of their own – secrets that could turn her life upside down forever.

This is a first book from these authors for me,it is the first book in a series.The storyline is enjoyable..nothing better then reading about werewolves..right?The story had its good parts and bad parts.The good,I enjoyed the characters bantering, getting a feel for Samara's home and school life.I was drawn into the book..it kept me reading so thats always a plus.
The Bad.There is a part in the book when Samara is Bitten by a Wolf its a game changer,However she is bitten and its like oops paper cut.Not I was just attacked by a wolf lets get some emergency help..no she was just bitten not a big deal at all. The way the Characters acted after that was rather unbelievable..I had to read it twice to make sure I read it correctly.This may just be something nit picky on my part but having to read Samara feels this way,Samara went there,Samara decided to do this was flat out annoying.I would have rather read She chose to do this,She wanted that etc.It got so repetitive..I wanted to shout that I knew the main characters name already.I also found it really odd that Samara's parents were referred to as Mr.McKinley and Mrs.McKinley.Again it may be nit picky on my part but im so used to reading,"Her mom said, or Samara's Dad said etc. Not Mr.McKinley said.I feel like some basic editing needed to be worked on.
That being said if you can overlook certain aspects of the book then its a very very enjoyable start to the series.At .99 on the kindle its not to bad.Ive started the 2nd book and am enjoying it so far.Its a new twist on a Cute werewolf series.Give it a chance Read it and I hope you enjoy it.
Posted by Le'BookSquirrel at 12:38 PM