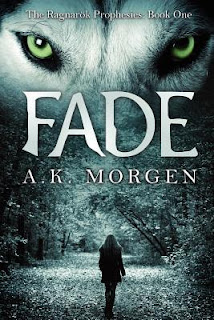 What do you do when you realize that nothing in your life is what you’ve always believed it to be?

The death of Arionna Jacobs’ mother has devastated her, and Dace Matthews is torn in two, unable to communicate with the feral animal caged in his mind. When they meet, Dace tumbles into Arionna’s mind as if he belongs there, and everything they thought they knew about themselves and the world around them begins to fall apart. Neither of them understands what is happening to them or why and they’re running out of time to figure it out.

An ancient Norse prophesy of destruction has been set into motion, and what destiny has in store for them is bigger than either could have ever imagined. The end is coming, and unless they learn to trust themselves and one another, they may never unravel the mystery surrounding who they are to one another, and what that means for the world.

Fade(The Ragnarok Prophesies) is the story about Arionna Jacobs and Dace Matthews.It has everything.Romance, Supernatural, Prophesy and so much more.FADE is an amazing and fast paced read.Arionna meets Dace at College in her town after her mothers death.They have an instant connection.Only Arionna finds out Dace is so much more then she though..But then so is she,so is the town.I rarely give out spoilers so thats all your going to get in a short synapses.
I believe Fade(The Ragnarok Prophesies) is the first book by this author and what an amazing start to the series.Dace..yum.Series sometimes are hard for me if the author doesn't get me interested.Luckily im so interested Im over here holding a sign with the words..Will blog for book two. This book had everything I needed to draw me in.The romance was on point.It was enough and not over the top like in some shifter books.I really enjoyed the action of the book as well..parts were so action packed I almost couldn't turn the page fast enough.I can only hope the second in the series will be out soon to put me out of my misery.

Posted by Le'BookSquirrel at 1:44 PM

Email ThisBlogThis!Share to TwitterShare to FacebookShare to Pinterest
Labels: 2012, 2012 release, A.K.MORGEN, FADE, LeBookSquirrel, YA, YA paranormal, YA romance