Happy Release Day of The Trouble With Flirting By Claire LaZebnik!!! 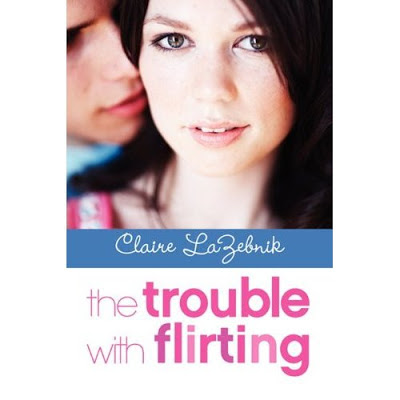 Franny's supposed to be working this summer, not flirting. But you can't blame her when guys like Alex and Harry are around. . . .

Franny Pearson never dreamed she'd be attending the prestigious Mansfield Summer Theater Program. And she's not, exactly. She's working for her aunt, the resident costume designer. But sewing her fingers to the bone does give her an opportunity to spend time with her crush, Alex Braverman. If only he were as taken with the girl hemming his trousers as he is with his new leading lady.

When Harry Cartwright, a notorious flirt, shows more than a friendly interest in Franny, she figures it can't hurt to have a little fun. But as their breezy romance grows more complicated, can Franny keep pretending that Harry is just a carefree fling? And why is Alex suddenly giving her those deep, meaningful looks? In this charming tale of mixed messages and romantic near-misses, one thing is clear: Flirting might be more trouble than Franny ever expected.


The Trouble With Flirting Was sent to me as an ARC for an honest review.

The Trouble with Flirting takes place during summer when Franny who goes to a school where most of the
are well off has to work during the summer with her Aunt sewing at Mansfield Summer Theater Program.While working there she gets back in touch with a friend,Julie and her Brother Alex,who at one time Franny had a crush on.Then Franny meets Harry,Isabella and several other amazing secondary characters.The story is very reminiscent of Jane Austen's Mansfield Park.

First off, please let say how much I loved this story.I was literally glued to the book from start to finish. The conversations between Harry and Franny were hilarious.I'm not sure if its because of my sense of humor but they were just spot on.Each character was so well thought out and developed that the writing flowed so very smoothly.My heard did break for Franny for a small bit(I will refrain from saying why as not to spoil it..as I dislike spoilers).The ending was Super Sweet..Im one of those people that love to reading about characters even if their story is technically over so I would love to read about more about Harry and Franny..perhaps even their little group of friends.I am a huge Jane Austen Fan so I was able to see the inspiration of Mansfield Park in it and Claire LeZebnik was able to take it and make it her own version.

If you are looking for an "I cant put this book down type" of read then give The Trouble with Flirting a chance.Its an amazing read and the dialogue is outstanding.Claire LeZebnik has without a doubt written another winner.

One of My Favorite quote from the book due to the scene was "Come as soon as you can,"I whisper in his ear."As soon as I can,"He promises.

1.Where did the idea for The Trouble With Flirting Come from?

From Jane Austen’s Mansfield Park, actually. My previous novel, Epic Fail, was based on Austen’s Pride and Prejudice and this time around I wanted to tackle a lesser-known Austen. I combined her story line (or, rather, a very loose adaptation of her story line) with a settling gleaned from real life: my son had spent the previous summer doing two intense acting programs and I thought it would be fun to set a YA novel at one. The two separate inspirations came together nicely. I love when that happens.

2.How emotionally attached to the characters are you?

I really identify with my protagonists, even when they’re significantly different from me (younger, prettier, saner, etc.). I feel like I’m thinking their thoughts along with them, and I suspect that if you filmed me writing, I would look wildly emotional: I smile when my characters are happy and frown when something’s wrong and I tear up when I’m writing a sad scene. But I don’t feel like they’re real people or anything—I mean, I’ve “killed off” characters when I’ve had to. For example, there was originally a fifth sister in Epic Fail but my editor felt that was too many sisters to keep track of . . . and boom, she was gone. So there's a limit to how much I identify with them!

3.Any new Work in Progress that we can look forward too?

Absolutely! I’m finishing up the manuscript for another HarperTeen novel, due out in the summer of 2014. Once again it’s loosely based on a Jane Austen book (Persuasion this time) and set in modern-day Los Angeles. I’m really happy with this one: the character makes a big mistake and has to redeem herself over the course of the novel.  I think we've all had those big moments we wish we could take back or do over--but all we can do is learn and move forward.
4.Have you read anything great lately?

Yes, Cloud Atlas by David Mitchell. It was a challenging book and I wasn’t sure I’d make it through the first fifty or so pages, but the more I read, the more drawn in I got, and by the time I had reached the halfway point, all I wanted to do was sit and read that book. It’s brilliant and fascinating and just stunning.

5.If there was one thing you could tell readers..what would that be?

Don’t ever stop reading books! It’s so easy to get sucked into the kind of short form reading we do on the computer and on our phones, but there’s nothing so wonderful as losing yourself completely in a long, densely packed, wonderfully entertaining book. It’s like living in a different world for a while. Where else can you get that kind of intense vacation from real life for just a few dollars?

I Just wanted to take a minute to tell Claire,Thank you so MUCH for being on Le'BookSquirrel on Release Day.The Trouble With Flirting is a WONDERFUL book and I am so Proud of you!I hope many read it and enjoy it as much as I have!Thank You again!
Posted by Le'BookSquirrel at 7:19 AM