*REVIEW* The Rules For Disappearing By Ashley Elston 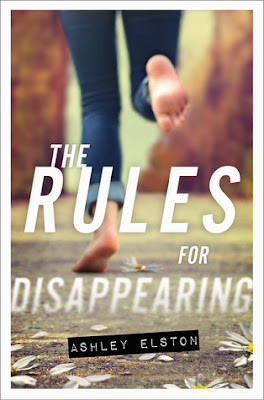 The Rules For Disappearing
By Ashley Elston
Publication Date: May 14, 2013

She's been six different people in six different places: Madeline in Ohio, Isabelle in Missouri, Olivia in Kentucky . . . But now that she's been transplanted to rural Louisiana, she has decided that this fake identity will be her last. Witness Protection has taken nearly everything from her. But for now, they've given her a new name, Megan Rose Jones, and a horrible hair color. For the past eight months, Meg has begged her father to answer one question: What on earth did he do—or see—that landed them in this god-awful mess? Meg has just about had it with all of the Suits' rules—and her dad's silence. If he won't help, it's time she got some answers for herself. But Meg isn't counting on Ethan Landry, an adorable Louisiana farm boy who's too smart for his own good. He knows Meg is hiding something big. And it just might get both of them killed. As they embark on a perilous journey to free her family once and for all, Meg discovers that there's only one rule that really matters—survival.
-----------------------
REVIEW
5 STARS
I know a Book is going to be great when I can literally jump in it.When the world around me ceases to exist.Rules For Disappearing was that book.It takes you on the journey of Megan Rose and her family as they are in the Witness Protection Program.Their new home is in Louisiana and Megan again has to uproot what little life she had before to go there.On her first day of school she meets Ethan.Ethan who suspects there is more to Megan then she is saying.
I absolutely loved Rules For Disappearing.I was entrenched in Megans life and felt her emotions.Im not sure how well a teenager could deal with all that Megan was going through but Megan was so mature in the way she handled things.This has to be one of my favorite books that I've had the pleasure of reviewing.The Cover is beautiful.The content is wonderful.My only issue was the ending.I felt it was a bit abrupt and would have enjoyed an epilogue to know what happened with the characters beyond the last chapter.I believe readers will love Megan's story and it holds surprises that they will be enthralled with.Congratulations Ashley Elston,You have created and amazing book that readers will come to know and love.

Add to GOODREADS :)
http://www.goodreads.com/book/show/13018503-the-rules-for-disappearing
You Can PRE-ORDER Via the link below
http://www.amazon.com/Rules-for-Disappearing-The-ebook/dp/B00BNMAVD0/ref=sr_1_1?s=digital-text&ie=UTF8&qid=1366460626&sr=1-1&keywords=the+rules+for+disappearing
Posted by Le'BookSquirrel at 8:44 AM