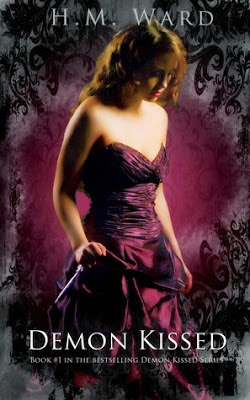 The Valefar boy tricked Ivy Taylor into kissing him, but he took much more than a kiss - he stole her soul and left her within inches of death.


By surviving, Ivy is drawn into the conflict between the Martis and the Valefar. The war between these two immortal forces has raged for millennia without distraction. Until now. Ivy is an anomaly--she is the only person who has ever walked away from a demon kiss alive. Her survival gives her unique and deadly abilities. Too powerful to ignore, Ivy is a threat to both armies. These two ancient enemies will stop at nothing to kill the seventeen-year-old.

Surviving is nothing new for headstrong Ivy, but her survival has never depended on another person before. This time it does. And if she misplaces her trust, she's dead. To her horror, she starts falling in love at the worst possible time--with the enemy. He appears to be protecting her. But she can't be certain if he is trying to help her, or help himself to her power.

For Ivy, trusting the right person is the difference between love and survival, or a deadly demon kiss.

Stop.Collaborate and Listen.Do I have your attention now?Read this book.Seriously.Its full of Awesomesauce. Ivy is attacked one night and drawn into an age old war between the martis,Heavenly creatures and Valefar Demon creatures.Ivy is both.Ivy is also the answer to a prophecy.Who is her friend and who is her enemy?Its almost to much for a 17 year old to deal with but Ivy handles it pretty darn well.
What can I say other then I read Demon Kisses and have been engulfed in the series.Im currently reading Cursed.Ivy she is a kick butt kinda girl.Collin Is a valefar.If he kisses Ivy he will take some of her soul.The problem is they are bonded.The attraction between them is so intense.Im not even going to attempt to go into it because I wont do it justice.Shannon,Eric and Al(who is a nun) are amazing secondary characters..You will see more of them in book 2.Demon Kisses starts off running and continues until hopefully the end of the series.I loved it and I have been recommending it to everyone.