Reaping Me Softly By Kate Evangelista 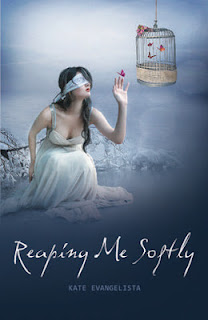 Ever since a near-death-experience on the operating table, seventeen-year-old Arianne Wilson can see dead people. Just as she’s learned to accept her new-found talents, she discovers that the boy she’s had a crush on since freshman year, Niko Clarke, is a Reaper.

At last they have something in common, but that doesn’t mean life is getting any easier. All while facing merciless bullying from the most powerful girl in school, Arianne’s world is turned upside down after Niko accidentally reaps the soul of someone she loves. This sends them both into a spiral that threatens to end Arianne’s life. But will Niko break his own Reaper’s code to save her? And what would the consequences be if he did?
---------------
REVIEW-Spoilers

Reaping Me Softly is the first book I have read by Kate Evangelista.Reaping Me Softly is about Arianne,who see's spirits and Niko who is a reaper.They go to the same high school,where they deal with a bully,Arianne's sick sister and so much more.
I felt this story flowed really well,It definitely was a page turner.I did have a few issues with the book,I think Arianna honestly took Niko being something not human a bit to easily.She didnt question it..it was as if it was an everyday occurrence.I also was kind of thrown for a loop with the whole Darla thing..It was just kind of out there and unexpected..Im not sure how I feel about it.The bullying was a bit understated...im not sure how one person could rule a school like that.When Niko accidentally takes Arianne's sisters soul I feel is was a bit rushed afterwards,with what happened.I would have liked it to slow down a small bit.
The ending was Killer though.I loved and hated the ending since I have to wait until book 2 comes..I do hope it is soon.It really brings the "How far would you go for the one you loved' right up front.All in All I really enjoyed Reaping Me Softly.I would and will suggest it as a book to read!

You can purchase Reaping Me Softly HERE.
Posted by Le'BookSquirrel at 7:58 PM