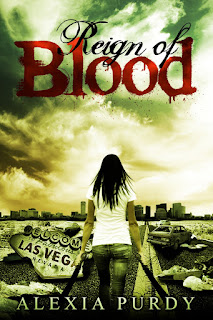 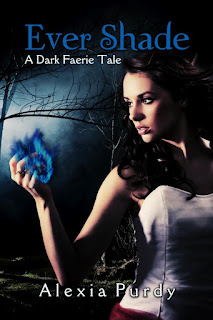 Alexia currently lives in Las Vegas, Nevada–Sin City! She loves to spend every free moment writing or playing with her four rambunctious kids. Writing has always been her dream and she has been writing ever since she can remember. She loves writing paranormal fantasy and poetry and devours books daily. Alexia also enjoys watching movies, dancing, singing loudly in the car and Italian food.  She is the author of Ever Shade: A Dark Faerie Tale, published by Crushing Hearts and Black Butterfly Publishing and Whispers of Dreams (A Poetic Collection), both available via Amazon.com. Ever Fire: A Dark Faerie Tale #2 will be released in October of 2012. She is currently working on Ever Winter, the third installment of the Dark Faerie Tale series.
Connect with Alexia Purdy
Alexia Purdy’s Blog
Alexia Purdy’s Website
Twitter
@AlexiaPurdy
Goodreads Author page
Alexia Purdy’s Facebook Fan Page
[Ever Shade (A Dark Faerie Tale) Facebook Fan page
]Reign of Blood Series Facebook Fan Page

Blurb:
"Never tease anything that wants to eat you. My name is April Tate and my blood is the new gold. Vampires and hybrids have overrun my world, once vibrant with life, but now a graveyard of death shrouded in shadows. I fight to survive; I fight for my mother and brother. The journey is full of turns that I am quite unprepared for. And I'm just hoping to make it to the next Vegas sunrise..."[Soft Break][Soft Break]In a post-apocalyptic world, a viral epidemic has wiped out most of the earth’s population, leaving behind few humans but untold numbers of mutated vampires. April is a seventeen-year-old girl who lives in the remains of Las Vegas one year after the outbreak. She has become a ferocious vampire killer and after her family is abducted, she goes searching for them. What she finds is a new breed of vampire, unlike any she has seen before. Unsure of whom she can trust, she discovers that her view of the world is not as black and white as she once thought, and she's willing to bend the rules to rescue her family. But in trying to save them, she may only succeed in bringing her fragile world crashing down around her.

Excerpt #1
Rye tilted his head as he narrowed his steely eyes, sizing me up. “You think you’re so righteous, don’t you? This so-called mission of yours–killing the wildlings like animals–and for what? Just to find your family. Does that make you better than us?” He started shaking his head as he further closed the gap between us, a sinister grin dwelling on his lips. “But you’re not better than us, April. You, my dear, are just another kind of vampire.”

Excerpt #2
My eyes fell on one thing that I had not noticed before. The driver’s side door was slightly cracked open. My stomach lurched for a moment as I slowly stepped around the front of the van to look at the door. A smear of blood ran along the handle and up to the edge of the window. A bloody handprint of dark brick red in color, painted the center of the door. I gasped as my heart jumped, immediately drawing my machete out. I crouched against the van as my eyes darted around, looking for anything that would lead me to where they were. I searched the ground for blood trails but none could be found. If scavengers were out here too, they could have snatched them and I’d have been none the wiser. Not that I had seen any for almost a year.

Excerpt #3
I rounded the corner and came to dead stop. Before me stood a woman, dirtied and with wild hair. Her face was streaked with grime and rips ran through her clothing. Blood had dried in dark red and brown splats on her shirt and pants and the large Rambo-like knife that she fingered in front of me. She was ready to pounce, slowly shifting on her legs as she narrowed her eyes at me. Sucking in my breath, I instinctively reached for one of the machetes strapped to my side.

I was too slow.
Posted by Le'BookSquirrel at 2:33 AM