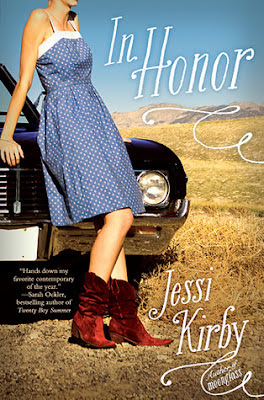 Honor receives her brother’s last letter from Iraq three days after learning that he died, and opens it the day his fellow Marines lay the flag over his casket. Its contents are a complete shock: concert tickets to see Kyra Kelly, her favorite pop star and Finn's celebrity crush. In his letter, he jokingly charged Honor with the task of telling Kyra Kelly that he was in love with her.
Grief-stricken and determined to grant Finn's last request, she rushes to leave immediately. But she only gets as far as the driveway before running into Rusty, Finn's best friend since third grade and his polar opposite. She hasn't seen him in ages, thanks to a falling out between the two guys, but Rusty is much the same as Honor remembers him: arrogant, stubborn. . . and ruggedly good looking. Neither one is what the other would ever look for in a road trip partner, but the two of them set off together, on a voyage that makes sense only because it doesn’t. Along the way, they find small and sometimes surprising ways to ease their shared loss and honor Finn--but when shocking truths are revealed at the end of the road, will either of them be able to cope with the consequences?

Whew,This was an emotional read.Honor's brother is killed in action in Iraq,She reads a letter sent by him that was received after he passed away.She leaves immediately with the tickets that were enclosed.However,prior to her leaving Her brothers old friend Rusty shows up and ends up going with her.Along the way they are able to mourn and perhaps find love along the way.
First let me start off by saying I am in a military household so this hit very close to home.No one wants this to happen to anyone.I can honestly say the only thing that disappointed me in this book was that I wasnt sure if Honor and Rusty would continue their relationship.I would have liked an Epilogue just so I would know.I was also sad that it wasn't longer..but like I say its a sign of an amazing book when you don't want it to end.Thats it..thats the only fault I have with this story.It was a wonderful story that had two souls going on a journey and being able to grieve.
You can purchase In Honor HERE on Amazon.I hope you enjoy it and are as enthralled in it as I was.

Posted by Le'BookSquirrel at 1:34 AM