Congratulations on the Release of Storm Shells By G.J. Walker-Smith!!! 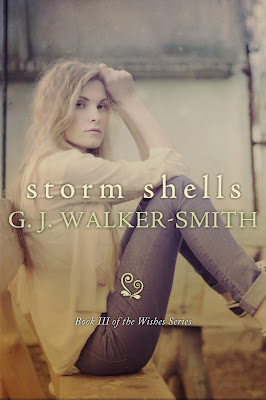 The only way to move forward was to go back to the very beginning….
After three miserable weeks without Charli, Adam makes the decision to follow her, desperately hoping to find a way of following through on his promise of a happy ending.
He finds her back in Pipers Cove, healing her broken heart by spending time with the one person who never lets her down.
Both know nothing has changed. They're desperately in love, hopelessly stuck in limbo, and unable to find common ground.
When fate offers them a chance at a different kind of ending, it’s a one-shot deal. Running with it means changing their plans – something neither of them has ever been willing to do before, even for each other.
Just as one begins to find their way, the other completely loses direction – and neither of them realise that time is running out.
http://www.amazon.com/Storm-Shells-Wishes-G-J-Walker-Smith-ebook/dp/B00GL47TK8/ref=sr_1_2?s=digital-text&ie=UTF8&qid=1384175010&sr=1-2&keywords=g.j+walker-smith

“I looked down at my creature of mayhem and instantly felt like the luckiest man on earth, for no other reason than I loved her.


Life without Charli was structured, organised and dull. Any normal man would’ve been thrilled to give it up for her. I was beginning to realise that there was something really wrong with me.” - Adam

**NEW RELEASE DATE- Book 3, Storm Shells available NOVEMBER 10** For Charli Blake, being seventeen is a tough gig. She's been branded a troublemaker, her reputation is in tatters and she's stuck in Pipers Cove, a speck of a town on the coast of Tasmania. Thankfully, it's temporary. Her lifelong dream of travelling the world is just months away from becoming reality. All she has to do is ride out the last few months of high school, which is easier said than done thanks to a trio of mean girls known as The Beautifuls. When Adam Décarie arrives in town, all the way from New York, life takes an unexpected turn. His arrival sets off a chain of events that alters her life forever, convincing her of one thing. Fate brought him to her. Saving Wishes is the story of a girl who doesn't quite fit the life she's living, and the boy who helps her realise why.
http://www.amazon.com/Saving-Wishes-1-GJ-Walker-Smith-ebook/dp/B00BEJC9E6/ref=la_B00BEOAOZW_1_2?s=books&ie=UTF8&qid=1384175152&sr=1-2

***NEW RELEASE DATE - Book 3 Storm Shells, available NOVEMBER 10*** Charli Blake's high tolerance for risk doesn't always work in her favour. After a year of living out her dream of travelling the world, the sunny West African village of Kaimte would be her last stop. She's bound for New York, in search of the boy she'd let go of long ago. For Charli, nothing has changed. She's travelled thousands of miles but hasn't moved an inch. Adam Décarie still means everything to her. But reality soon hits hard. For Adam, everything has changed. Memories of the best love she's ever known is all she has left, until Charli makes a shocking discovery. None of it had ever been real in the first place. **Please note, this is not a stand alone novel. Second Hearts is book 2 of The Wishes Series. Please consider reading Saving Wishes, book 1.
http://www.amazon.com/Second-Hearts-Wishes-G-J-Walker-Smith-ebook/dp/B00C6BF22M/ref=la_B00BEOAOZW_1_1?s=books&ie=UTF8&qid=1384175296&sr=1-1

Posted by Le'BookSquirrel at 8:09 AM

Email ThisBlogThis!Share to TwitterShare to FacebookShare to Pinterest
Labels: Congratulations on the Release of Storm Shells By G.J. Walker-Smith!!!