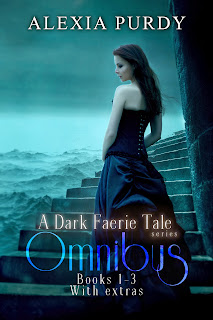 This Omnibus includes the following Novels & Novellas:
Evangeline
Ever Shade
Ever Fire
Ever Winter
The Cursed
(Also Available Separately)

Shade is thrown into the Land of Faerie when she meets a mysterious Teleen warrior, made of fire and electricity. Sent on a journey to obtain a rare magic only she can wield to save the Seelie forces against the Unseelie armies, she discovers her unique inner magic and possibly a difficult choice in love.

The Unseelie Queen Aveta is not one to trifle with. She hunts Shade down for her own devices and will destroy everything Shade loves to get what she wants.

After barely escaping the clutches of the Unseelie and stripped of her newfound magic, Shade journeys to the Ice Kingdom, The Great Divide, to hopefully retrieve her bound up powers from an Ancient Faerie King named Corb− but loses her memories instead. Alongside her body guard Dylan, a former Captain of the Teleen Guard, she lays havoc to the Ice King’s fortress and forces their return to the Teleen kingdom. Hurrying to reach the Southern Realm, Shade claims her rightful throne and prepares for the upcoming battle with the Unseelie army.

Smashwords: https://www.smashwords.com/books/view/334063
Posted by Le'BookSquirrel at 8:42 AM