So this was my first reaction when I found out Komal was releasing not ONE but TWO Cover Reveals in the same day...

Echoes of Melody by Komal Kant is a coming-of-age story where being normal isn’t everything it’s cut out to be. This Young Adult Contemporary novel is set to release in 2014, and is told from the eyes of a teenage boy who has a unique perspective on life.

Please add it to your Goodreads!

My thoughts on Echoes of Melody's Cover...

Its Simply Breathtaking..Stunning...My words Do not do it justice.. 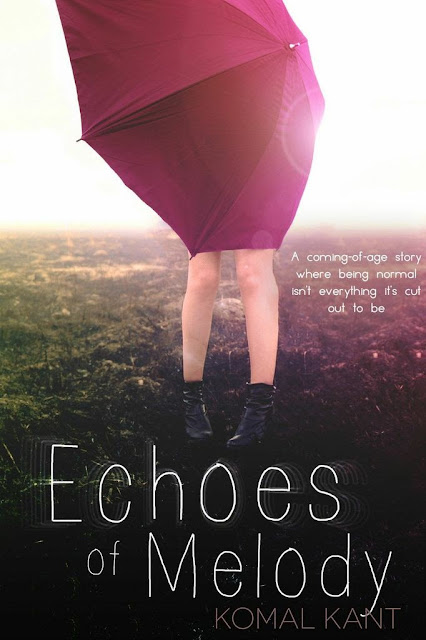 This is not one of those conventional love stories.

It’s not one where the guy has a six-pack and all the girls drool over him and want to have his babies.

I know this because I’m the guy and I’m pretty unimpressive as far as guys go. I don’t even have a one-pack.

This isn’t a story where the girl is a perfect female specimen who blushes and bites her lip and wants to make your life better.

Nope. The girl is pretty freaking messed up. Also, she has an unhealthy attachment to a pink umbrella.

But look who’s talking. I’m just as messed up as she is.

Together, we make one screwed up couple. We’re trying to help each other through our various issues, but most of the time we just end up arguing or making out.

I told you we were screwed up. 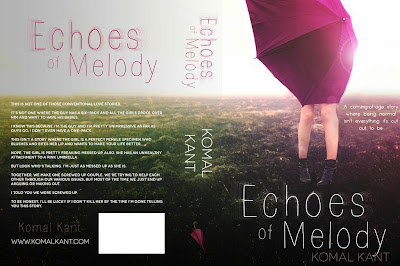 To be honest, I’ll be lucky if I don’t kill her by the time I’m done telling you this story. 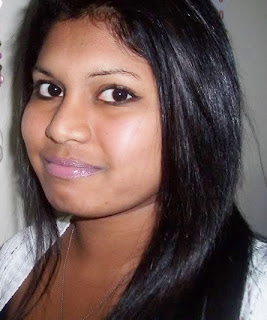 Komal Kant is the author of IMPOSSIBLE, FALLING FOR HADIE, and the upcoming WRONG SIDE OF TOWN. She currently lives in Sydney, but wishes she lived all over the world.

Her weird-filled days are filled with imaginary characters who often speak to her in hushed tones before stealing her lunch money; Siberian Huskies who talk back a lot; and the growing need to clone herself so she can write faster.

You can often find her swooning over fictional male characters who smirk a lot, superhero-related movies, and Ryan Gosling. So if there was ever a superhero movie with Ryan Gosling in it smirking a lot, she would pass out from an overload of swooniness.

Add the book on Goodreads: http://www.goodreads.com/book/show/17886229-echoes-of-melody

Posted by Le'BookSquirrel at 9:38 AM