If I Lie By Corrine Jackson 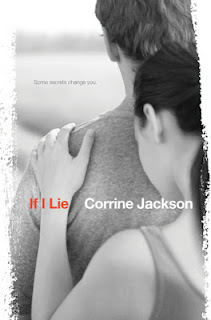 A dramatic and powerful novel that explores the gray space between truth and perception.Cheater. Traitor. Slut.
Quinn’s done the unthinkable: she kissed a guy who is not Carey, her boyfriend. And she got caught. Shunned by everyone she knows, Quinn loses her friends, her reputation, and her identity. Because Carey’s not just any guy—he’s a Marine who’s serving overseas, and beloved by everyone in their small, military town.
But Quinn didn’t cheat. She could clear her name, but that would mean revealing secrets she’s vowed to keep—secrets that aren’t hers to share. So she stays silent, and waits for Carey to come home.
Then Carey goes MIA, and Quinn must decide how far she’ll go to protect her boyfriend…and her promise.
----------------------
Review

If I Lie is a story about Quinn and a secret that she is keeping for her boyfriend Carey.She was caught kissing another boy and has suddenly been labelled the town pariah.Then Carey..who is in the military goes MIA and everything just escalates.Should Quinn reveal Carey's secret or not?
From the moment I started this book I was enthralled.I was literally pulled inside this book.I felt Quinns emotions...When Quinn was being harrassed..I felt that,When her dad was being distant..I felt that.This book was so much more then what I expected. Quinn was so much stronger then what she thought she was.I fell in love with George and The whole military history aspect.What a way to bring that into the story.Im not sure how I feel about Carey and Blake.Carey I think was quite selfish in his need to protect his lie..However he had his reasons.Blake..Blake should have really done things differently.But perhaps it is because I am looking at this from a females point of view.
From start to finish I was invested in the story.I would LOVE to have a sequel to it.Im not sure if it is possible but I would love to know how Quinn does in college and I think she deserves to have her own romance.Corrine Jackson..You have written a winner!I look forward to reading more of your books.

You can Purchase If I Lie HERE  from Amazon.

Posted by Le'BookSquirrel at 4:48 PM