Death and the Girl Next Door-Darynda Jones 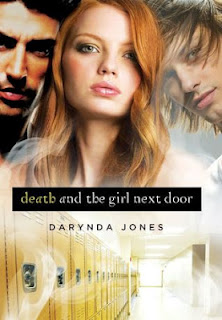 Darynda Jones, author of The New York Times bestselling series that began with First Grave on the Right, brings us Death and the Girl Next Door, a thrilling Young Adult novel garnering high praise and early buzz from major authors
Ten years ago, Lorelei's parents disappeared without a trace.  Raised by her grandparents and leaning on the support of her best friends, Lorelei is finally beginning to accept the fact that her parents are never coming home.  For Lorelei, life goes on.
High school is not quite as painful as she thinks it will be, and things are as normal as they can be.  Until the day the school's designated loner, Cameron Lusk, begins to stalk her, turning up where she least expects it,  standing outside her house in the dark, night after night.  Things get even more complicated when a new guy—terrifying, tough, sexy Jared Kovach—comes to school.  Cameron and Jared instantly despise each other and Lorelei seems to be the reason for their animosity.  What does Jared know about her parents?  Why does Cameron tell Jared he can't have Lorelei?  And what will any of them do when Death comes knocking for real?  Thrilling, sassy, sexy, and inventive, Darynda Jones's first foray into the world of teens will leave readers eager for the next installment.

Im not sure how I feel about this book.I liked it and yet I felt a bit let down by it.Perhaps its the fact that I've read books dealing with these types of angels before.I kept waiting for the romance..the history and it never came.I kept waiting for these two guys to fight over Lorelei romantically and they didnt.In fact they fought..so much it got old because it seemed trivial what they were fighting for.The book was a bit confusing until the ending..It would have been better to have more history of the angels.I kept waiting for the big build up and there never was..it flitted from one thing to another like the snap of a finger.I did enjoy the wittiness of the characters..they were pretty hilarious.I just feel the book could have delved a bit more into the characters then it did.I love the cover as well..I think thats why i expected  more romance then there was.
Posted by Le'BookSquirrel at 7:21 PM

Email ThisBlogThis!Share to TwitterShare to FacebookShare to Pinterest
Labels: 2012, Amazon, Author, darynda jones, Death and the girl next door, YA, YA contemporary, YA paranormal