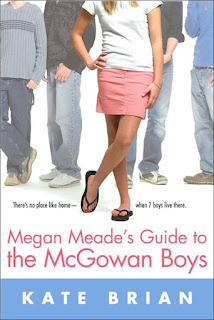 When she was nine, Megan Meade met a group of terrible, mean, Popsicle-goo-covered boys, the sons of her father's friend -- the McGowan boys. Now, seven years later, Megan's army doctor parents are shipping off to Korea and Megan is being sent to live with the little monsters, who are older now and quite different than she remembered them.
Living in a house with seven boys will give Megan, who has never even been kissed, the perfect opportunity to learn everything there is to know about boys. And she'll send all her notes to her best friend, Tracy, in...
Megan Meade's Guide to the McGowan Boys

Observation #1: Being an army brat sucks. Except that this is definitely a better alternative to moving to Korea. Observation #2: Forget evil, laughing, little monsters. These guys have been touched by the Abercrombie gods. They are a blur of toned, suntanned perfection.
Observation #3: I need a lock on my door. STAT.
Observation #4: Three words: six-pack abs.
Observation #5: Do not even get me started on the state of the bathroom. I'm thinking of calling in a hazmat team. Seriously.
Observation #6: These boys know how to make enemies. Big time.
Megan Meade will have to juggle a new school, a new family, a new crush -- on the boy next door, as in next bedroom door -- and a new life. Will she survive the McGowan boys?

----------------------------------------
Megan's parents are in the military and are moving to South Korea.Megan is tired of moving and wants to stay in the states.In order for her to stay she has to stay with the McGowen Boys..who have drastically changed from in the years since she last saw them.
First off let me pre-face this and say I expected more from this book.I liked it and it drew me in,kept my attention in the book.However the lack of romance in the book was a big disappointment.You have a really good book and then you have one measly chapter of a small romance and then You have no idea whats going on with that relationship since the book never takes you there or goes over it.Just brushes over it.I thoroughly enjoyed this book except for the ending.I feel the ending could have closed things up a bit more..Unless there is going to be a sequel.Perhaps that's why it was left the way it was.This book is a fun read that is worth taking the time to read.

You can purchase Meagan Meade's Guide to the McGowan Boys HERE
Posted by Le'BookSquirrel at 12:19 PM