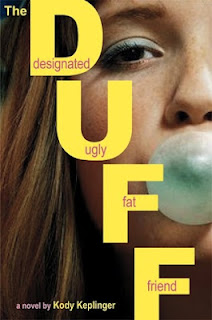 Seventeen-year-old Bianca Piper is cynical and loyal, and she doesn't think she's the prettiest of her friends by a long shot. She's also way too smart to fall for the charms of man-slut and slimy school hottie Wesley Rush. In fact, Bianca hates him. And when he nicknames her "Duffy," she throws her Coke in his face.

But things aren't so great at home right now. Desperate for a distraction, Bianca ends up kissing Wesley. And likes it. Eager for escape, she throws herself into a closeted enemies-with-benefits relationship with Wesley.

Until it all goes horribly awry. It turns out that Wesley isn't such a bad listener, and his life is pretty screwed up, too. Suddenly Bianca realizes with absolute horror that she's falling for the guy she thought she hated more than anyone.

Meet Bianca..as described she feels she isnt as pretty as her 2 other friends and she is quite snarky.After a flinging of the drink at Wesley after he calls her a DUFF(Designated Ugly Fat Friend) she finds she is attracted to the one person who she does not want to be attracted to.They have a hidden friends with benefits thing going on.Bianca's mother is gone alot and its just her and her dad and then her mom up and files for divorce.Her dad does not take it well at all.Wesley's parents seem to just forget about him and he is constantly alone which is why he surrounds himself with girls..much to the annoyance and man-slut term Bianca uses.Both Bianca need each other and dont realize how much they do until Bianca realizes something and runs out on Wesley.
I could not put this book down.It held me from page 1.Two teens who are desperate for affection,One to ease the loneliness and one to forget.Perhaps they should have found other ways rather then sex to deal with this but honestly in this book it worked.Both were quite mature for their age.My favorite part of the book was the ending.I wont divulge what happens but its magnifique (said in a french accent ).

If you would like to purchase DUFF you can HERE
Posted by Le'BookSquirrel at 4:11 PM