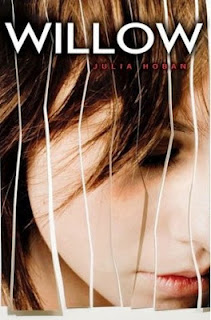 Seven months ago, on a rainy March night, sixteen-year- old Willows parents drank too much wine and asked her to drive them home. They never made it Willow lost control of the car and her parents died in the accident. Now she has left behind her old home, friends, and school, and blocks the pain by secretly cutting herself. But when Willow meets Guy, a boy as sensitive and complicated as she is, she begins an intense, life-changing relationship that turns her world upside down.
Told in an arresting, fresh voice, Willow is an unforgettable novel about one girls struggle to cope with tragedy, and one boys refusal to give up on her.

-------------------
Let me start by saying this is a very tough topic to write about.It is not an easy subject matter. Willow is a 16 year old girl whose parents died in a car crash and Willow was the driver.The guilt of it is so overwhelming that Willow Copes by Cutting herself.Guy and Willow meet and He becomes the person she somewhat confides in.He is against her cutting and is very good for Willow.
I enjoyed this story,I really did not like it in the third person though.Ive never been a fan of it though.I would have rather known how Willow was feeling and what she was thinking.I just dont like the whole..she said this she said that.blah blah blah.It took me a small bit to get over it but I was still able to enjoy the story.I kept wondering why no therapists were brought in by Willows brother and wife.Honestly after something tragic happens you need them so you can start to grieve and move forward.
Overall, a really touching read.I think a few things could have been added to it to make it a bit better but again it was a good read that I would willingly read again.Cutting is a serious issue not to be taken lightly.If you are having problems please talk to someone.Anyone.

If you would like to read Willow you can find it HERE on Amazon.
Posted by Le'BookSquirrel at 2:12 AM