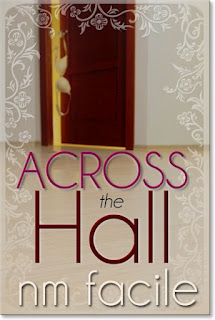 Sylvia O’Mara has spent the last four years trying to get over her high school sweetheart, who after breaking off their relationship left town without any reasons. With the help of her friends she has moved on and started dating a mysterious bad boy. She isn't happy, but she's content; until she meets the new neighbor.

Quinn Lobato has recently moved to Minneapolis to finish college close to his parents. His mother found the perfect apartment for him close to campus and assured him it has everything he needs. Quinn has had his own hurtful past and is looking forward to starting med school and a new life.

Little do they know that what they each need is waiting just across the hall.

Major Spoilers In the 2nd chapter...Cover your eyes! :P

Wow what a story!Across the Hall is a story about two people who are trying to get over their pasts.Little did they know how much they would need each other.I cannot even begin to imagine having the person who broke your heart,who you never got over move in across from you,but that is what happens to Sylvia.Meet Quinn..who single handily ruined Sylvia emotionally...He did have his selfless reasons I have to add.One must have a "Villian" in a book once in awhile and the Villian here is Beau.Beau is Sylvia's "boyfriend" and a bad boy who ends up stalking her.Beau is BAD.
The Point of View goes from Sylvia to Quinn each chapter,I like this idea to a point.What I did NOT like was the fact that I read Sylvias Point of View and the next chapter had to read quinns take on the previous chapter..which basically made me feel like I was reading the same chapter twice the entire book.Everyone who reads this blog has to know..Im an Epilogue Girl...This Epilogue was one I did not enjoy.It was taken too far into the future.I would have been happy knowing they had a wonderful like and kids etc.I really didnt need to see them as Grandparents.I just think She took it too far into the future.To go from them being 22 respectively to suddenly grandparents in the Epilogue was a bit of a leap for me.
I can respectively group this book with the likes of Jamie Mcquire and Colleen Hoover.I thoroughly enjoyed this book.It was YA MATURE novel.There is Cursing,Sex and lots of drinking in it..which totally makes for a pretty darn great book.You can Purchase Across the Hall  HERE on Amazon.


Posted by Le'BookSquirrel at 1:49 PM