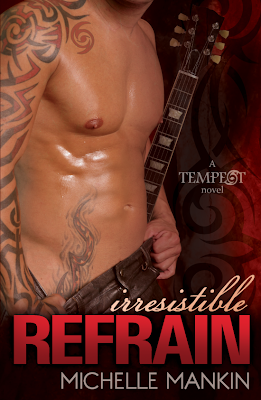 Two years ago everything changed for the remaining members of the Seattle rock band Tempest.
Two years is a long time.
Too long to keep on remembering.
Not nearly long enough to forget.
In trouble with nowhere else to go songstress Lace Lowell seeks refuge with the band during their stop in New York City. It's a risky move for her because they are both there, two impossibly good looking men whose lives are inseparably entwined with hers. One who bruised her heart and one who smashed it into pieces.
Warren “War” Jinkins, the mercurial lead singer of Tempest, has always had a thing for Lace. But then again so does his best friend and band mate.
Bryan “Bullet” Jackson, the sinfully handsome tat-sleeved lead guitarist, has a bad boy reputation befitting his nickname. For the past two years Bullet’s had a rule with the groupies: one time, never twice, leave ‘em satisfied, but always leave ‘em.
Two guys, one woman, and a host of dark secrets all together within the tight confines of a tour bus as the group travels cross country.
Can the past be forgotten and buried?
Will friendships prevail?
Or will the three of them succumb to seductive impulses too addictive to resist?

** Irresistible Refrain is a gritty rock and roll tale intended for mature readers seventeen and up. Contains sexual situations, strong language, and drug use. **

Heroin is an opioid drug that is synthesized from morphine, a naturally occurring substance extracted from the seed pod of the Asian opium poppy plant. Heroin usually appears as a white or brown powder or as a black sticky substance, known as “black tar heroin.”
In 2011, 4.2 million Americans aged 12 or older (or 1.6 percent) had used heroin at least once in their lives. It is estimated that about 23 percent of individuals who use heroin become dependent on it.
How Is Heroin Used?
Heroin can be injected, inhaled by snorting or sniffing, or smoked. All three routes of administration deliver the drug to the brain very rapidly, which contributes to its health risks and to its high risk for addiction, which is a chronic relapsing disease caused by changes in the brain and characterized by uncontrollable drug-seeking no matter the consequences.
Injection Drug Use and HIV and HCV Infection
People who inject drugs are at high risk of contracting HIV and hepatitis C (HCV). This is because these diseases are transmitted through contact with blood or other bodily fluids, which can occur when sharing needles or other injection drug use equipment. (HCV is the most common blood-borne infection in the Unites States.) HIV (and less often HCV) can also be contracted during unprotected sex, which drug use makes more likely.
Because of the strong link between drug abuse and the spread of infectious disease, drug abuse treatment can be an effective way to prevent the latter. People in drug abuse treatment, which often includes risk reduction counseling, stop or reduce their drug use and related risk behaviors, including risky injection practices and unsafe sex. (See box, “Treating Heroin Addiction.”)
What Are the Other Health Effects of Heroin?
Heroin abuse is associated with a number of serious health conditions, including fatal overdose, spontaneous abortion, and infectious diseases like hepatitis and HIV (see box, “Injection Drug Use and HIV and HCV Infection”). Chronic users may develop collapsed veins, infection of the heart lining and valves, abscesses, constipation and gastrointestinal cramping, and liver or kidney disease. Pulmonary complications, including various types of pneumonia, may result from the poor health of the user as well as from heroin’s effects on breathing.
In addition to the effects of the drug itself, street heroin often contains toxic contaminants or additives that can clog blood vessels leading to the lungs, liver, kidneys, or brain, causing permanent damage to vital organs.
Treating Heroin Addiction
A range of treatments including be-havioral therapies and medications are effective at helping patients stop using heroin and return to stable and productive lives.

There are real heroes, and there is hope and help.
Do better. Be better.
“I’m going to take that chance and I’m going to do better. I’m tired of the roller coaster I’ve been on. I’m tired of all the lies, especially the ones I’ve been telling myself. I really thought I could quit whenever I decided. I realize now that’s not true.” –Lace Lowell