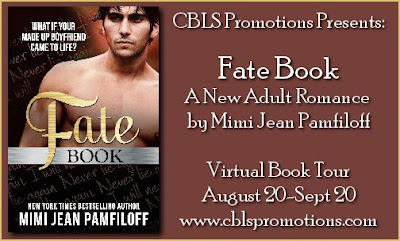 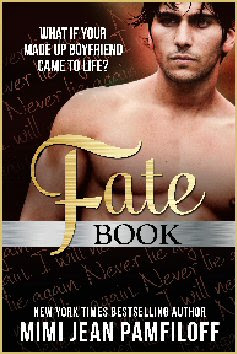 Description:
Dakota Dane is about to tell a lie she’ll wish she hadn’t.  Because her lie is dangerous, sexy, and just showed up on campus, angry as hell and looking for her...

Ugly duckling Dakota Dane has a new boyfriend. He’s male-model gorgeous, built to perfection, wealthy, and smart. He is also a lie. As in, 100% fabricated. Does it matter that Dakota has a perfectly good reason for making him up? Not really. Not when Dakota’s made-up boyfriend shows up on campus in the flesh.

So is she crazy? All signs point to maybe. But the walking, talking enigma with the deadly vibe isn’t about to give her any answers or let her out of his sight. And with college just around the corner, Dakota fears her dreams of a bright future have just collided with a dark rabbit hole…

Warning: This title is intended for readers over the age of 18 as it contains adult sexual situations and/or adult language, and may be considered offensive to some readers.

Excerpt:
Lord. Whoever had been on the other end of that phone was coming to my room. I had to get out of there. Because as much as I loved believing in miracles, those didn’t exist, which meant this guy was some psychopathic stalker, some frigging lunatic who’d convinced everyone he was my boyfriend.

I slipped from the covers and immediately had to brace myself on the edge of the hospital bed. My head pulsed with painful, dizzying jabs. I slowly stood upright and willed myself steady. My ribs and hip were sore, but I’d survive. That was, if I got the heck out there.

I blew out a breath and wobbled to the clear plastic bag hanging on the wall with my belongings. I had to find my mother. I had to warn her. What if this guy showed up and tried something?

I slipped on my jeans, sweatshirt, and sneakers, not bothering with the other stuff. I grabbed my phone and purse and tiptoed to the door.

I poked my head out, hoping to spot my mother doing rounds, but instead I saw—

The breath whooshed from my lungs. ?

My stomach and heart squeezed into a brick and then dropped through the center of my body.

Because the man I’d invented—correction—the gorgeous man I’d stolen a picture of, stood twenty feet away, speaking to my mother, wearing low-slung faded jeans and a fitted white, button-down shirt.

I stared in wonderment while my eyes infused with his image and branded itself on my brain. He was lust, rock star, tough guy, jock, Prince Charming, and misfit rolled into one dangerous, rugged, well-groomed package. He sent my female brain into a tailspin.

I’ve lost my mind. That gorgeous man is not standing there. That’s not possible!

I willed my heavy feet to move, but my eyes remained glued to him. He was tall—around six three or six four—and, just like in his photo, built like a lean, mean predatory animal with broad shoulders and powerful-looking…everything. Especially those arms. And those legs. And those…yep. Everything. To boot, he stood with the sort of confidence that gave me the distinct impression he really might be deadly. And ate his meat raw. Possibly still squealing.

, who towered over my mother, leaned down and hugged her. Then my mother said something, and they laughed like old friends.

What? He hugged my mother? What was happening? Did she know him? Was the universe punishing me for lying? If it was, it was totally working. I’d never, ever lie again.

About the Author:
Before taking up a permanent residence in the San Francisco Bay Area, New York Times and USA Today Bestselling Author Mimi Jean Pamfiloff spent time living near NYC (became a shopaholic), in Mexico City (developed a taste for very spicy food), and Arizona (now hates jumping chollas but pines for sherbet sunsets). Her love of pre-Hispanic culture, big cities, and romance inspires her to write when she’s not busy with kids, hubby, work, and life…or getting sucked into a juicy novel. Or hosting the Man Candy Show on Radioslot.com! (Be very afraid!). She hopes that someday, leather pants for men will make a big comeback and that her writing might make you laugh (or give you a mini-vacay) when you need it most. 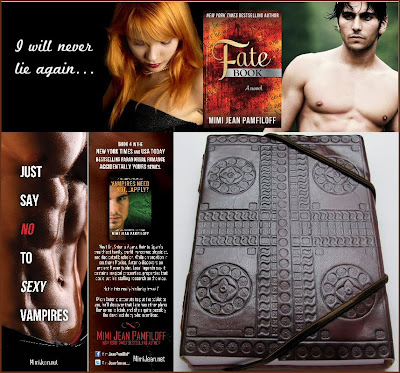 Prize is 2 "Fate Book" Prize Packs (1 each to 2 winners). Each pack contains an autographed print copy of "Fate Book", a leather journal, and a sexy "Vampires Need Not Apply" and "Fate Book" bookmark from Mimi Jean Pamfiloff (prize image attached). Contest is tour-wide and ends Sept 21. Must be 18 years of age or older to enter.