These AMAZING Books, After Tuesday and Forgotten By Renee Ericson are F-R-E-E
Wednesday January 5th and Thursday January 6th 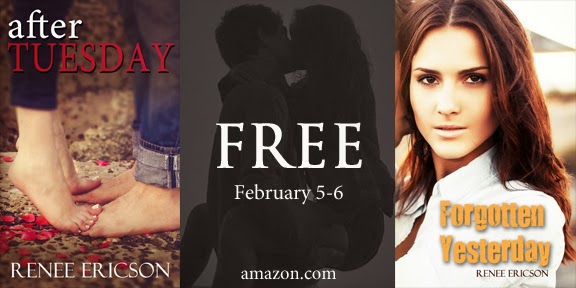 After Tuesday buy link:
http://amzn.com/B00CNVVJZE
Family really is a pain…especially when your father is an addict.

For the last two years, high school senior Ruby has been her own rock and solace. She has learned to depend only on herself and hides her family's issues by keeping herself somewhat unnoticeable. Despite her isolation, Ruby has intrigued the affections of someone unexpected. Finding herself loving life once again as his persistence sparks a romance awakening a well-protected heart.

While Ruby’s relationship with her father is constantly teetering, her new-found affection continues to blossom into something more than she ever thought possible. Soon, Ruby comes to realize that opening up your heart means being susceptible to love and disappointment.

YA-M: This book contains mature content including profanity, drug/alcohol use, and sexual situations/language.

Ruby Miller's future was on track when she entered her freshman year of college at the University of Chicago. Everything seemed easy, possible, and full of hope, especially with Brent by her side.

However, life didn't go as planned and obstacles arose setting her on a very different path from the one she had envisioned.

Now, five years later, Ruby is piecing her life back together and moving on from everything that once tore her apart.

What happens though, when the one person who carries every memory of Ruby's happiest and darkest moments appears unexpectedly before her? Will she carry on or dive deep into her forgotten yesterday?

**A These Days Novella

*** This is a continuation into Ruby's adult life from the YA-M novel, After Tuesday.

Posted by Le'BookSquirrel at 8:40 AM

Email ThisBlogThis!Share to TwitterShare to FacebookShare to Pinterest
Labels: *FREE January 5th and 6th * After Tuesday and Forgotten Yesterday By Renee Ericson